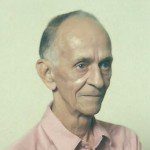 WESTFIELD – Donald “Jock” Hanson, 86, of Westfield, passed away peacefully at home on November 9, 2012. Originally from Windsor, Nova Scotia, he was the son of Annie Brenton Hanson and Maurice Hanson.
He attended King’s Collegiate School and was an avid athlete in his youth playing for the Hantsport Shamrocks baseball team and playing in the Maritime World Series. He also spent a lot of his youth at the Windsor Tennis & Golf Club and was a one-time Nova Scotia tennis doubles champion. He moved to Westfield in 1962 and was employed for many years at Toledo Scale as a technician until his retirement. His favorite pastime locally was golf and he played many years at Edgewood Golf Club in Southwick. He also enjoyed his time spent volunteering for the Chester Foundation.
He is survived by his wife of 59 years, Aileen R. Hanson; his son, Douglas; his daughter, Melanie Nitsch; son-in-law Eric, and beloved grandchildren Bethany and David. He also leaves behind a brother, Roland Hanson, in Windsor, Nova Scotia, and was predeceased by his sister, Elizabeth Bligh.
Burial will be at the convenience of the family in Pine Hill Cemetery in Westfield. Legacy Funeral Home of Westfield is handling the arrangements. A gathering for family and friends in Donald’s honor will be held in the Fellowship Hall of Southwick Congregational Church from 12 noon to 3:00 p.m. on Thursday, November 15, 2012.
Memorial contributions in Donald’s honor may be made to Noble Visiting Nurse and Hospice Services, 77 Mill Street, Westfield, MA 01085.
www.legacy-funeralhome.com