SOUTHWICK – At the Sewer Implementation Committee meeting this past week, an update was made about the water meter project that the Southwick DPW is organizing.

According to DPW Director Randy Brown, the contractor for the project, East National Water, is currently still replacing the water meters for the first two regions of town. Those regions consist of all of the roads that surround Congamond Lake.

East National Water, which is based out of Palmer, Mass, has been working on those regions for the past four to six weeks. The contracting company has split up into two crews and each crew has installed 8-12 meters per day.

As it is mandatory that every home throughout Southwick gets their old water meter replaced with a new one, up to 2,600 water meters will be installed. 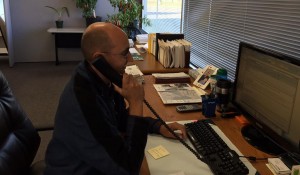 Knowing that they are still in the early stages of the project, Brown is satisfied with the progress made thus far.

“The project is moving along pretty good,” said Brown.

The Westfield News first reported on the water meter project on Sept. 17. It was noted that the current residential meters are up to 20 years old. At a town meeting two years ago, Brown was able to secure local appropriated funds of up to $1.4 million for this project.

With regions one and two still ongoing, Brown is unsure as to when East National Water will move on to the next region, but he believes the company will start region three once the meter work for the first two regions begins to slow down.

Brown also wanted to stress that with this project being mandatory for all residents of Southwick, people will begin to get notified several times if they aren’t making an appointment with East National Water to get their meter replaced. The notices will come before any fines would be set in place.

The DPW is overseeing this effort despite the contractor is who is installing the meters. Brown says that his department will be ready if needed.

“We are available to provide assistance,” said Brown.

The process for getting your water meter replaced goes directly to East National Water. Residents are asked to call East National Water to schedule an appointment once their particular region is up. Technicians from the company will come to the residence, replace the old meter, and do the complete installation. East National Water can be contacted at (800)-252-8556.