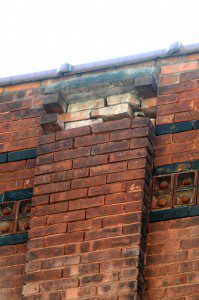 Bricks are missing from the tops of columns on the Arnold Street side of the Block Building and the danger of additional bricks falling has prompted city officials to accelerate efforts to demolish the building. (Photo by Carl E. Hartdegen)