WESTFIELD-For 155 years, an outreach team organizing the Episcopal Church of the Atonement’s Strawberry Festival has had one goal – to raise money to give away to the larger community, according to The Rev. Nancy Webb Stroud. 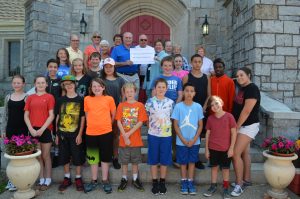 William R. Parks, CEO, Boys & Girls Club of Greater Westfield, receives a check for $8,200 from The Rev. Nancy Webb Stroud of the Episcopal Church of the Atonement from proceeds raised at the recent Strawberry Festival. Joining the celebration included boys and girls from the club as well as church members.

“Proceeds raised from this year’s Strawberry Festival is the largest grant ever given,” said Webb Stroud during a break in shopping at the Westfield Farmers’ Market on Thursday afternoon. The farmers’ market celebrated National Farmers’ Market Week with 33 vendors on the church lawn and business was brisk all afternoon, according to Debbie Randzio, market manager. Two new businesses also joined the market this week – Berkshire Blue Cheese of Great Barrington and A Carrot Factory from Worthington. In addition to the vendors, the Music at the Market series featured several musicians from noon to 6 p.m.
This year’s Strawberry Festival recipient, the Boys and Girls Club of Greater Westfield, was presented with a ceremonial check for $8,200 on Thursday at the farmers’ market. William R. Parks, CEO, Boys and Girls Club of Greater Westfield, accepted the check from Webb Stroud along with close to 20 young people from the club.
“Our church outreach team solicits grant requests each year and issues special criteria,” said Webb Stroud, adding this year’s target areas included helping kids and spotlighting nutritious food sources. “The Boys and Girls Club’s nine-week summer initiative fit perfectly into this year’s criteria since we were able to tie it into our Westfield Farmers’ Market.”
In recent years, festival fund recipients have been local organizations including Our House, the Westfield Food Pantry and the American Red Cross when the organization had an office in the city. In earlier years, funds have been distributed to causes including ministries in Haiti.
Parks, who co-chaired the festival with Tom Walsh, said receiving this year’s funds helped make a dream a reality for Kellie Brown, director of operations at the club.
“The money we are receiving will support our weekend backpack program which provides 50 kids each week with nonperishable foods to take home, along with nutritious snacks and small meals,” said Parks, adding that festival funds also allows 12 to 20 kids each week to attend the Thursday farmers’ market with $10 each to spend on fresh fruits and vegetables and any homemade items including jams, jellies, honey and pickles to bring home to their families.
“We encourage the kids to talk to the vendors when they make a purchase,” said Parks. “It is a learning experience for some of the club members who have never attended a farmers’ market.”
The club’s summer initiative, which has two weeks left to the season, also includes an informational sheet on food groups and recipes for the families to try, as well as a variety of books that are age appropriate.
“We have 50 bags a week that go out and this includes sending backpacks to the sites around the community so we can get food out into the community,” said Brown.
During remarks Parks thanked Webb Stroud and her team of church members who also attended the ceremony for their generous grant. He shared several comments from parents who have written to share their appreciation for the farmers’ market initiative.
“One parent wrote, ‘My child came home with a purple vegetable as he called it and wanted to know if we could eat it. I have never bought or cooked an eggplant before but he wants to try it so the family will all try it. Thank you for taking him otherwise none of us would have eaten eggplant,’” noted Parks.
For another parent, the comment was short but went to the heart of the matter.
“Another parent wrote to us, ‘You cannot begin to know how much this helps,’” said Parks, adding his goal is always to “stretch” any funds he receives as far as he can.
“Our goal is to see how successful we are with this summer initiative in the hope we can make the program extend to a monthly basis and even weekly one day,” said Parks.