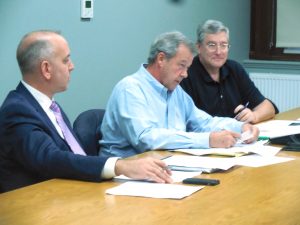 WESTFIELD – The Westfield City Council’s Finance Committee met at 5:45 p.m. on Thursday prior to the scheduled City Council meeting. At the start of the meeting, chair and Ward 5 Councilor Robert A. Paul, Sr. asked if anyone was taping the meeting. Matt Emmershy said he was live-streaming the meeting on Facebook, which required a brief explanation, and caused Paul to address that audience several times during the meeting.
Items discussed at the meeting included a $40,000 appropriation from the PEG (public, educational and governmental) designated fund balance. Paul asked city IT manager Lenore J. Bernashe if she had any comments, and she said it was a management fee for the city’s public access. The appropriation was recommended 3-0 by Paul and Finance Committee members At-large Councilors Matthew T. VanHeynigen and Dave Flaherty.
Also recommended was $5,000 from the Reserve for Unforeseen account to the Building Department, Emergency Security account. Building Commissioner Carissa Lisee said the funds were needed for an account created this fiscal year, to pay for securing structures abandoned after a fire. Lissee gave as an example the 40 Park Street fire, which had two fatalities. She said other uses this year were broken windows at Moseley School, and break-ins.
A grant in the amount of $14,460 from the Massachusetts Emergency Management Agency (MEMA) to the Westfield Emergency Management Department was also approved 3-0. Paul said this is another grant the city does not have to match. He said a portion of the funds would be used to purchase an all-purpose off-road vehicle which would be shared with the Westfield Police Department, DPW and other public safety agencies. Paul said the grant was supported by the Mayor and the departments.
A longer discussion was held about the bond orders to be rescinded within the Treasurer’s Department, which are old accounts that remained unborrowed. Paul said it is the city’s responsibility to clean up the bonds, and is “one of the terrific pieces of work (being done) by Finance.”
City treasurer Meghan Kane went through all the bonds, the largest being originally designated for Westfield Gas & Electric for work on the Great River Bridge, and another for gas line work. $7.75M was remaining on the first bond, which Kane said was originally for $12M, but some of the work had been defrayed by grants. The second one had $1M remaining, but the gas line projects on Mill and West Silver were completed, and the money didn’t need to be borrowed.
Another bond with $440,000 remaining for the Granville Reservoir Spillway had also been defrayed by grants, so the total Bond amount wasn’t required.
A Community Preservation Commission Bond order with $62,000 for Hangar #2 at Barnes had very specific CPA conditions to be used for the historic exterior envelope of the Hangar, and could not be used for other improvements.
“By closing these Bond, there can be no future charges on them. It’s good financial control,” Flaherty said.