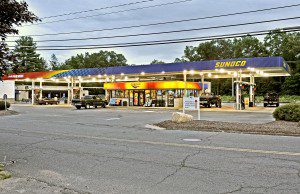 The F.L. Roberts Company has gained the approval from the Westfield License Commission to apply for a beer and wine package store license for the South Maple St. location. (File photo by Frederick Gore)

WESTFIELD – The F.L. Roberts Company of Springfield was given approval to apply for a beer and wine package store license for its South Maple Street location, known to locals as Westfield Sunoco, during a Westfield License Commission meeting at Westfield Vocational Technical High School.
In a unanimous decision, the  Commission voted to approve the company’s request to waive a local requirement for a separate entrance and counter to sell beer and wine in the store.
In August, F.L. Roberts presented its case for a waiver of the policy, which would clear a path for the company to apply for a beer and malt license. A representative for the company said F.L. Roberts already has licenses in three stores, with another coming soon in Whately.
An issue that was discussed by the commission Monday evening was whether the beer and wine would be sold at certain times of day and whether it would be locked down, to which F.L. Roberts District Manager and Westfield resident Ray Cross replied that there would be a beer display in the center of the store, as well as a small wine rack, but that the facility would lock down its coolers which would house additional beverages.
Cross  said at that early August meeting that his company “wants to meet our customers’ needs. We’ve received requests. We have the car wash, the Jiffy Lube, the convenience store. We want to make this a one stop shop for our customers.”
The company, which also runs a gas station/car wash on Route 20 in West Springfield, presented layouts during the August meeting of the store’s future interior if given a license, and proclaimed that they would retrain employees for selling beer and wine.
When asked by License Commissioner Ed Diaz whether or not they received any feedback from customers regarding the potential for beer and wine sales in the South Maple Street location, Maple Street employee Janice Lee was quick to answer.
“I’ve had customers say it’d be a great thing,” she said. “Everyday customers, two or three times a day.”
“I think FL Roberts is a great company,” License Commissioner Christopher Mowatt said. “The next step would be to submit an application and put it up for public participation at a hearing and we can make a decision on that.”
After the meeting, Cross was enthused about what had transpired at the evening’s event.
“We’re very happy with the board’s reaction,” he said of the License Commission’s approving his company’s request to apply for a license. “We think it’s the right thing to do.  We’re going to be a responsible retailer and hopefully once we submit the application and go through the proper channels, we’ll be able to sell beer and wine.”
When asked if he could put a number on what being granted a license would have on his company, Cross said he couldn’t say.
“We’re looking at it as a customer convenience factor more so than what it’s going to do for the bottom line,” he said. “Obviously it’s going to impact the bottom line in a positive manner, but no specific numbers.”
Cross said that the company would be looking to submit their application for a beer and wine package store license “within the next few days.”