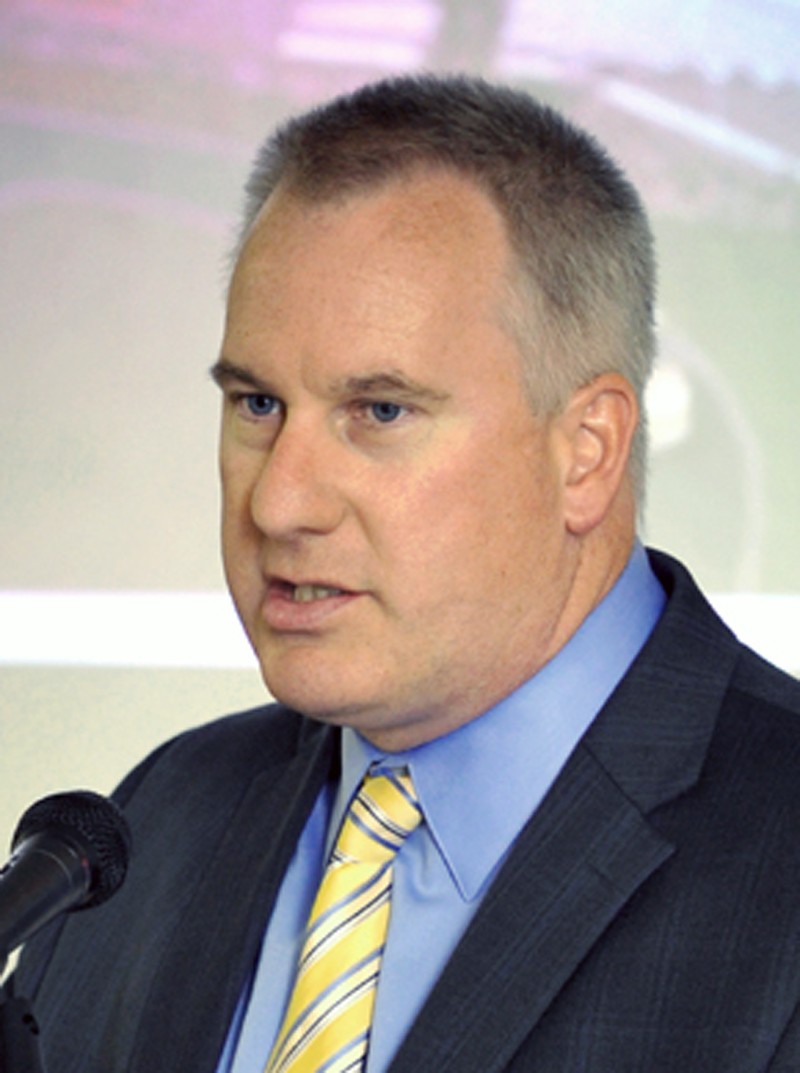 WESTFIELD – Former Mayor Daniel M. Knapik continues to promote the Massachusetts Green Communities Program, which promotes clean, renewable energy projects across the Commonwealth.
In November 2015, Gov. Charlie Baker appointed Knapik as director the Green Communities Division, which falls under the Massachusetts Department of Energy Resources.
Knapik’s background in municipal government has served him well in meeting with local officials, residents and business leaders about adopting the Green Communities Act. The act came into being in 2010.
The act “challenges” communities to reduce their energy footprint by 20 percent, said Knapik. The division manages and allocates $10 million a year in grants and technical assistant to the 161 communities that adopted the act.
In 2008, Knapik recalled the conversation in the legislature centered around clean energy or renewable energy sources.
Participating cities and town must abide by five criteria to be designated a Green Community.
The municipality must establish areas for “As-of-Right” zoning or parcels devoted to the manufacturing, research, development or generation of clean energy technologies like solar and wind.
“The Commonwealth has these goals to reduce greenhouse gas emissions. They realize they’ll get there through cities and towns,” said Knapik. “They wanted to make sure the cities and towns were prepared to site these type of facilities.”
A community must adopt expedited permitting or a streamlined process to get clean energy projects on board faster.
“Permitting mustn’t be an endless string of activities,” he said.
Centralized permitting reduces the process to one year or less.
The act also requires a community to submit an energy reduction plan that reduces a municipality’s energy footprint by 20 percent in five years. The plan only focuses on municipal operations, leaving residential and business properties alone.
Under the plan, cities and towns look for ways to improve energy efficiency in schools, municipal buildings, vehicle fleets or street lamps.
When available, the community must purchase fuel-efficient vehicles, not necessarily electric or hybrids. With improved fuel efficiency in today’s vehicles, Knapik said the rough and tumble Ford F-150 is allowed under the guidelines.
Emergency and public works vehicles are exempt from the plan.
“Essentially, the policy prohibits passing down old cars like a Crown Victoria to other divisions within the government or building department,” he said. “The vehicle purchased has to meet the standards.”
Finally, a community has to adopt the Stretch Energy Codes for new construction. The code calls for installing high-energy mechanical systems and building materials.
Knapik remembered the City of Westfield’s reluctance in adopting the Green Communities Act. He said the greatest opposition came from builders and developers who felt the Stretch Code was too cost prohibitive.
When the act was proposed in 2009, Knapik said a number of communities “fumbled” on the Stretch Code. Every three years, the Commonwealth updates base building codes, which factors in energy efficiency, he said.
The latest code updates, expected to be passed this year, essentially match the Stretch Codes from 2009.
Knapik, who met with City of Fitchburg officials this week, said the argument over the cost of implementing the codes no longer applies.
The City of Westfield is considered a Municipal Light Plant (MLP). An MLP community must pay into the Renewable Energy Trust Fund. Paying into the trust fund amounts to a 30 cents monthly add-on for ratepayers.
The trust fund established the Mass. Save Energy Program. In communities served by an investor-owned utility like Eversource, the city or town can benefit from the program. Westfield never tacked on the charge.
A low threshold exists for a municipality to participate in the program. For example, according to Knapik, a single Eversource customer in Westfield makes the city eligible to join the Green Communities Program.
He estimated 35 MLP communities in Massachusetts do not participate in the program.
“They can’t, right now, be eligible for funding that comes out year over year, $51 million plus to date from the last five years in this program,” he said.
The average annual grant ranges from $132,000 for a small town to $1 million for a city like Boston. The grants fund energy conservation measures, solar projects and covering incremental costs for hybrid vehicles.
“That’s essentially why Westfield, at the time, didn’t go down that avenue. There wasn’t an appetite on the City Council back in 2009 for anyone to usher it through. The MLP situation pretty much killed it,” said Knapik.
Now the DOER offers guidance to communities, guidance not available when the act was established. In communities that recently accepted the act, the Stretch Code is “no longer a stretch,” he said. On a map that shows the locations of current Green Communities, he noted several large pockets of cities and towns yet to adopt the program.
When passed, the new Stretch Codes will only affect new construction and not renovation projects, according to Knapik. “Getting into those last 291 communities is going to be some work because many have gone down that road,” he said.
He added Fitchburg’s new mayor has expressed interest in adopting the act.
During his time as mayor, Knapik said he often worked with DOER staff and officials on municipal projects, such as school buildings. The department also oversees and sets rules for Energy Service Contracts.
Under the contracts, the municipality works with experts who look for ways to reduce energy costs. The contractor then develops a strategy to realize those goals, which includes updates. The contract’s incentives are based on performance.
While in office, the City of Westfield underwent $51 million in renovations.
His years spent on municipal energy issues attracted him to the director’s job at DOER.
“This was an opportunity in which I could go into communities and spread the message that this program was available,” he said.
He has received full support of the Green Communities Program from the former administration and Gov. Charlie Baker.
“They both said conservation is our first fuel, the way we’re going to get out of a lot of problems we’re in,” he said. “There’s so much more we can do and I want to be the point person in this administration.”