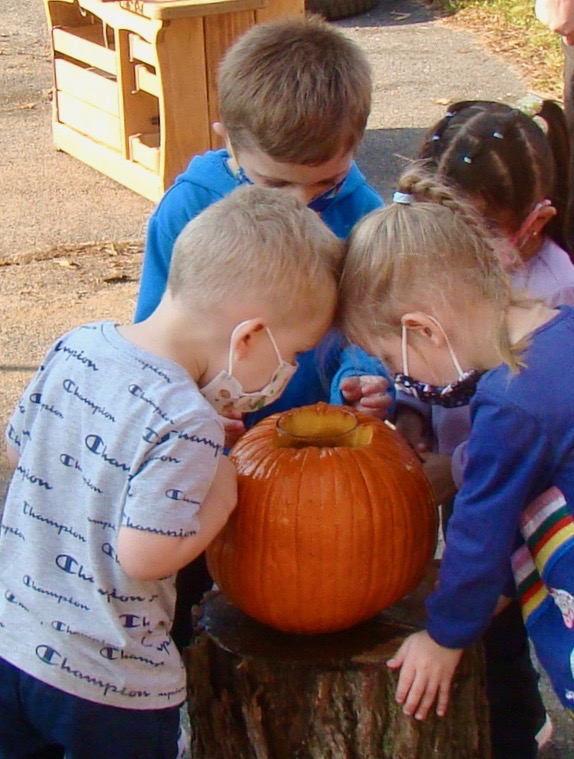 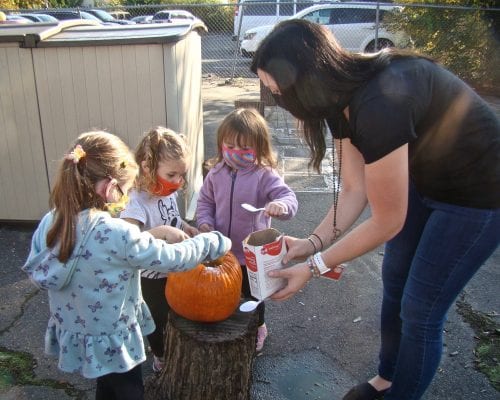 WESTFIELD – Excitement filled the air along with exploding pumpkins at Fort Meadow Early Childhood Center on Thursday, Oct. 22 as the pre-schoolers engaged in STEM week activities. 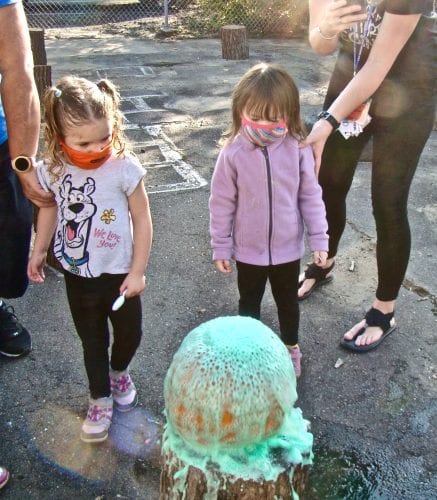 The children were astonished at the reaction made by adding vinegar to the mix. (AMY PORTER/THE WESTFIELD NEWS)

Science, Technology and Engineering Supervisor Lauren Figy and Math Supervisor Kate Perez led groups of three and four-year-olds in activities with their teachers, equally enjoyed by the adults that were present.

Perez led a pumpkin volcano activity, with the children putting in spoonfuls of baking soda into a scooped out pumpkin, before she added the vinegar. The overflowing green foam, thanks to some food coloring, fascinated the kids, although upsetting at least one by its powerful reaction. 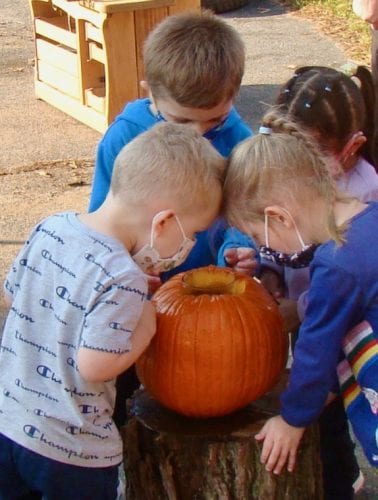 Other activities included an acorn maze race through some PVC pipe attached to the chain link fence. Indoors, children were reading “Have fun Molly Lou Melon,” about a girl who makes dolls out of twigs and flowers and things she finds in her own backyard, followed by the children creating their own nature collages out of leaves and acorns.

Children drop acorns In a maze made out of PVC piping. (AMY PORTER/THE WESTFIELD NEWS)

The highlight of the day was the pumpkin toss on a large catapult made by Figy’s husband John Cadigan, which she lugged to the playground area. The children then watched in small groups as the donated pumpkins were tossed, after guessing correctly whether big ones or small ones would go further (small ones), and marking the landing spots with flags, and measuring the distance with pool noodles and footsteps. 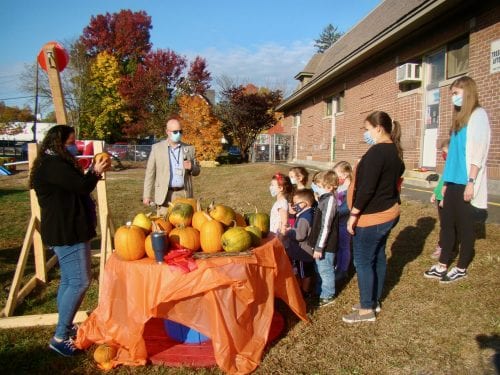 After the catapult, the children got to try their hand at catapulting acorns on miniature machines they had made out of popsicle sticks and rubber bands.

The science and math principles behind all of the activities were explained in a way the children could grasp. “They really get pre-schoolers,” said Fort Meadow Principal Joanne Hentnick about Figy and Perez, adding that not everybody does.

Hentnick said the kids are going to remember this event, and go home to tell mommy and daddy what happened in school. 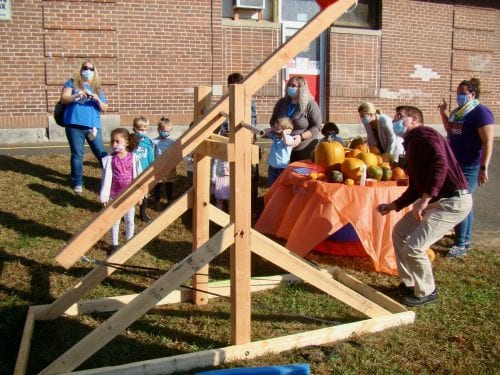 Superintendent Stefan Czaporowski, who was onsite in the morning recording his show with Chris Rogers on WSKB Community Television, suggested they might go home and ask if they can catapult a pumpkin. Czaporowski also made sure he got a turn at the catapult before he left.

Pre-K Teacher Sandra Gilbert said that happens a lot. “Parents ask how they can do our activities at home. So many standards are hit by the activities. My classes have been talking about acorns which grow into oak trees. It takes 30 years for an oak tree to produce acorns,” she said.

“It’s all about that science piece. It’s really neat to have kids take that information and bring it home,” Gilbert said. 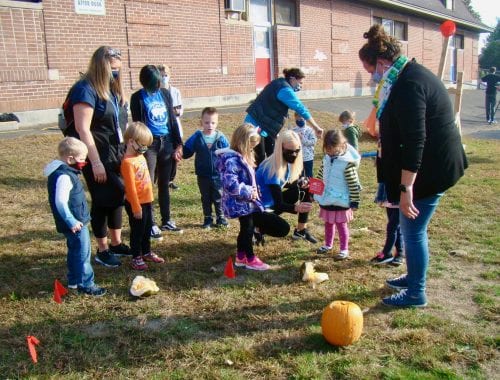 Figy and the children talk about what happens to the pumpkins when they land. (AMY PORTER/THE WESTFIELD NEWS)

“Watching our preschool students learn about math, physics, and chemistry today was a wonderful experience. I am impressed with our staff and their dedication to making learning relevant for our students,” Czaporowski said after the taping.

“It’s amazing. We needed a really fun day to let loose, and have fun learning. The kids will never forget this, that’s why field trips are so important in creating background knowledge,” Hentnick said. She said the teachers also take pictures and will make a book out of the day’s events, to look at and remember later.

Asked what will happen to the catapult at the end of the day, Figy said it is going home with her to their backyard. She said they have friends that are already making excuses to come over and catapult a pumpkin.