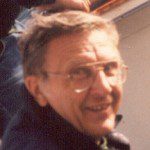 WESTFIELD – On November 19, 2012, Francis D. Kylis passed from this world and went fishing one last time. Born on August 29,1927, Francis lived his entire life in Westfield, MA.
After attending local schools, he enlisted in the U.S. Army where he served in WW II in the 11th Airborne, 187th Glider Infantry Regiment. Upon return from Japan, he worked as a machinist until his retirement in 1992.
Francis was the husband of the late Annette R. (Montambault) Kylis. They were married in Montreal, Canada on July 30th, 1949 and made their home in Westfield for 62 years. Francis leaves behind his son, Lloyd D. Kylis and wife Carol (Horak) Kylis of Waterloo, NY and daughter, Michelle E. Lengyel and husband Kevin and two grandchildren, Kaulman and Emily, all of Pomfret Center, CT.
Known as “Rabbit” to his friends, Francis loved to tell a good story and have his morning coffee at Mrs. Murphy’s. He was an avid gardener with two green thumbs. Francis was a big outdoorsman and enjoyed hunting peasant, turkey and deer. His biggest pleasure of course, was fishing. Francis was a devoted husband and dedicated father. He was a man of generous spirit, always willing to help someone out. He will be missed.
Calling hours will be held on Sunday, November 25 from 3:00-5:00 p.m. at the Firtion-Adams Funeral Service, 76 Broad Street, Westfield, MA. Committal Services with military honors will be held on Monday at 10:00 a.m. at the Mass Veterans’ Memorial Cemetery, 1390 Main Street, Agawam, MA.
In lieu of flowers, donations may be made to the Westfield Fire Department Ambulance Fund, 34 Broad Street, Westfield, MA 01085.
firtionadams.com