CHESTER – At a special town meeting on Saturday, the Gateway Regional School District Budget Version 2 was defeated by a majority voice count. Since the budget failed to pass four towns, it now goes back to the School Committee, who will be tasked with voting on another budget within 30 days to send to the towns. If four towns fail to pass a new budget by Dec. 1, the Department of Elementary and Secondary Education (DESE) will set the budget for FY18, which began on July 1. 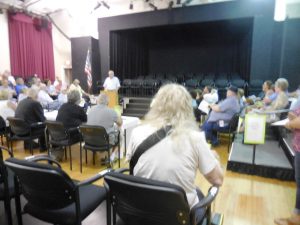 Chester’s over-minimum contribution to Gateway, the portion of the budget which was defeated on Saturday, was $407,286. Their overall assessment for Gateway of approximately $1.5 million had increased by $14,400 in Version 1, and decreased by $6,500 in Version 2. The savings were offset by an increase in the minimum contribution set by the state of $2,241, which was voted and passed at the special town meeting. The over-minimum contribution is the only portion of the Gateway budget that the towns can legally reject.
During the discussion at the meeting, a parent asked what the tax impact would be on the town if they were to pass the over-minimum contribution. The parent was told, after a brief discussion by the Board of Selectmen, that the increase would be 20 to 25 cents per thousand dollars.
“We’re arguing about a quarter on our kids’ future?” responded that parent.
For Chester, it was not so much about how much the town was being assessed this year. “It’s not the financial impact (of this year’s budget), it’s the process. The process is broken,” said Board of Selectmen chair John Baldasaro following the half-hour debate and vote, which town administrator Patricia Carlino called “democracy at its best.”
Baldasaro said the towns are given a bottom line number, and are asked to put it into their budgets. He said all other departments are reviewed line by line. “We want the same input into that budget,” he said.
During the meeting, School Committee member Diane Dunn responded to that notion. “All School Committee meetings are open to the public, except executive sessions,” which she said are mostly for contract negotiations. “There are no secrets, no closed doors. It is a transparent process,” Dunn added.
Dunn also said the School Committee did a lot of work this year to organize the process to be more inclusive of the towns for next year. The School Committee has scheduled five joint budget meetings with town officials for FY19 budget development. Facilitated meetings to look at the long-term picture are also being arranged.
“What we’re getting is obstruction in a budget that’s already created,” Dunn added. She said that sending the budget back to DESE won’t result in any more money for the school or the towns.
“It’s an effort of GTAC (Gateway Towns Advisory Committee) to work together and change the complexion,” making the School Committee look bad, said long-time School Committee member Shirley Winer.
Baldasaro said the other main consideration this year was the high increase to Huntington and especially to Russell. Huntington’s overall assessment, which had increased by more than $141,000 in Version 1, was decreased by $7,000 in Version 2. Russell was facing a bottom line increase of more than $196,000 in Version 1, which decreased by about $11,000 in Version 2. Both towns voted down the Gateway budget last week.
“There’s been a very clear shift in attitude among the towns. A number of towns are standing together supporting each other. If we lose another town, (Gateway) is no longer financially solvent,” Baldasaro said. 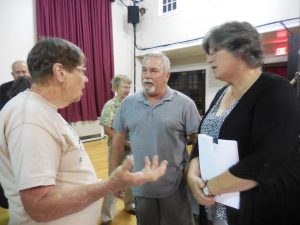 “It’s no longer let the other towns sink or swim. We’re committed to the Hilltown Collaborative,” added selectman Barbara Huntoon. She said Westfield sent students to Russell, and it wouldn’t be a stretch for Russell to send students to Westfield, or for Middlefield to send students to a school in Berkshire County.
“Per student, we pay $18,792, compared to $13,000 to $15,000 per student at other regional schools,” Huntoon said. She referred to a comment made by Finance Committee member Andrew Myers, who is also the chair of the Hilltown Collaborative. “It’s not sustainable,” she said.
Myers has been very involved in finding ways to make the hilltowns more sustainable through shared financial services, IT services and hiring a shared economic development director for the Gateway towns, all with grants received through the Community Compact the towns signed with Governor Charlie Baker last year.
“Gateway’s not the problem with our budget, the economy is the problem,” Myers said after the meeting. “We’re trying to be constructive and make an investment in Gateway,” he added.
“We have attended School Committee meetings. There is a new openness, a change in the process. Hopefully, this will be the last year,” Baldasaro said about the highly charged debate. He said they don’t like it either. “Parents are upset, and the seniors are upset,” he said.
“Now that we’ve gone this route, we’ve got more work to do,” added Board of Selectmen clerk Rene Senecal.