HUNTINGTON – At the first scheduled joint budget conference between the Gateway Regional School Committee and officials from the six member towns, chair Michele Crane began by explaining the format of the meetings. Crane said that unfinished and finished business would be first on the agenda for the six meetings, with a goal of the joint FY19 budget talks to begin at 7:30 p.m.
The unfinished business at Wednesday’s meeting was a vote by the School Committee on Version 3 of the FY18 budget, which began July 1 and has not yet been approved by four of the six towns. 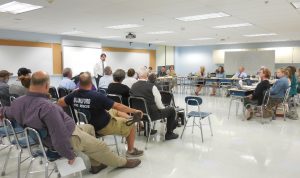 In presenting Version 3, Gateway Regional Superintendent Dr. David B. Hopson asked Megan Coburn, principal of Chester and Littlefield Elementary Schools and Jason Finnie, principal of Gateway High School and Middle School, to explain what impact further cuts would have on their schools.
Coburn said that at the elementary level, there are three types of teachers, core teachers, para professionals and specials. This year, three positions and one half-time position have been cut or not filled. Previously, they had three classes for each grade level, and now some grades have two classes and some three. She said they have created looping classes to help with the imbalance, where a teacher will stay with a class for two years.
Coburn said that there are also pockets of high enrollment, particularly in the kindergartens, with 21 children in one kindergarten class in Chester, and 25 each in two classes in Littleville.
Both Coburn and Finnie said that special teachers, who are teaching subjects other than core, such as art, music and physical education, give core teachers the prep time required by their contracts when students are with them.
Regarding special education teachers, Coburn said, “If we can’t meet the needs here, students will go out of district.” She said, as it is, half of the special education teachers split their time between Littleville and Chester, and the other half between Littleville and the middle school.
“In my opinion, we’re pretty much tapped to what we can do,” Coburn said.
Hopson said that the elementary schools can’t lose any special education teachers without losing students to other schools, at an average cost to the district of $165,000 per student after reimbursement.
Finnie said that the new alignment in the middle school of grades 6-8 supports the developmental needs of the students. He said it is important to maintain teaming, regular meetings and tiered support among the teachers. He also said that any further cuts eliminates core teachers in the middle school, which would make teaming impossible, and erode what the middle school is all about.
He said as far as specials, he lost a couple of teachers in the middle school in health and STEM, and gained a half-time multi-cultural and language teacher when retired teacher MaryAnn Shipman returned this year.
Finnie said the major focus in the high school is to maintain a competitive program, by offering AP courses and honors classes. “If we lost any teacher in core areas, we will lose AP classes, and may or may not have honors classes,” Finnie said. He said changing the class schedule from five periods to seven periods has allowed more flexibility in scheduling, and allowed more students to get the classes they want.
“You can’t look at a high school and look at just the numbers,” Finnie said, responding to remarks about small classes. “If you merge classes, kids won’t get the schedules they want, because we are down to so few teachers,” he added.
Finnie said he has also had to have special education teachers teaching integrated math and English language arts, which is not an ideal situation.
When asked about the percentage of vocational enrollment, Finnie said that 15-20 students out of an average grade level of high 60’s to 70’s go to Westfield Technical Academy or Smith Vocational, approximately 20-25% of each class.
Hopson said Version 3 of the budget is $54,000 lower than Version 2, which three towns rejected over the summer, and approximately $100,000 more than last year’s budget. Hopson also said that Version 3, with a bottom line of $16,035,958, does not change the current offerings which the students are already taking since school began.
Gateway business manager Stephanie Fisk said the biggest reduction in Version 3 was the result of 6-7 new employees waiving health insurance. Both Crane and Hopson said the budget needed a vote at the meeting, because the 15-day extension they were given for a new budget will run out before the next meeting.
“If one more town accepts the budget, then we have a budget,” Hopson said.
A motion was made by the School Committee to accept Version 3 of the budget. During the discussion, town officials spoke about the trends of declining student enrollment and the aging of the population in the region.
Huntington selectman Darlene McVeigh commented on the structural issues at the high school, which had the largest decrease in enrollment. She asked how it could be resolved. “We understand that you can’t change things for FY18, because we’re already in it,” McVeigh said.
School Committee member Martha Otterbeck of Chester said that she is a member of the Gateway 2025 visioning committee, which is also concerned about the trends.
Russell member Tara Balboni added that the School Committee can’t get into those issues when they are mired in a six-month budget process. The School Committee then passed Version 3 unanimously.
Little time was left to begin a joint budget discussion of FY19, before the 8:45 Executive Session for negotiations, which was voted by the School Committee at the start of the meeting began.
Hilltown Collaborative chair Andrew Myers passed out demographic trends of the region prepared by the Department of Revenue’s Division of Local Services over the summer, and spoke about some of the efforts by the towns to share services and attract more business and tourism.
Hopson said the next joint budget session scheduled on Nov. 8 would be a good time for the towns to share their goals and other information with the School Committee.
Following the acceptance of the budget, a letter will go out to each of the towns with its new assessment. Only the three towns that voted down the previous budgets, Chester, Huntington and Russell will have to hold a special meeting to vote on Version 3 of the Gateway budget.
If one of those towns does not pass Version 3, the Department of Elementary and Secondary Education will take over by or before Dec.1, and set the budget for FY18.