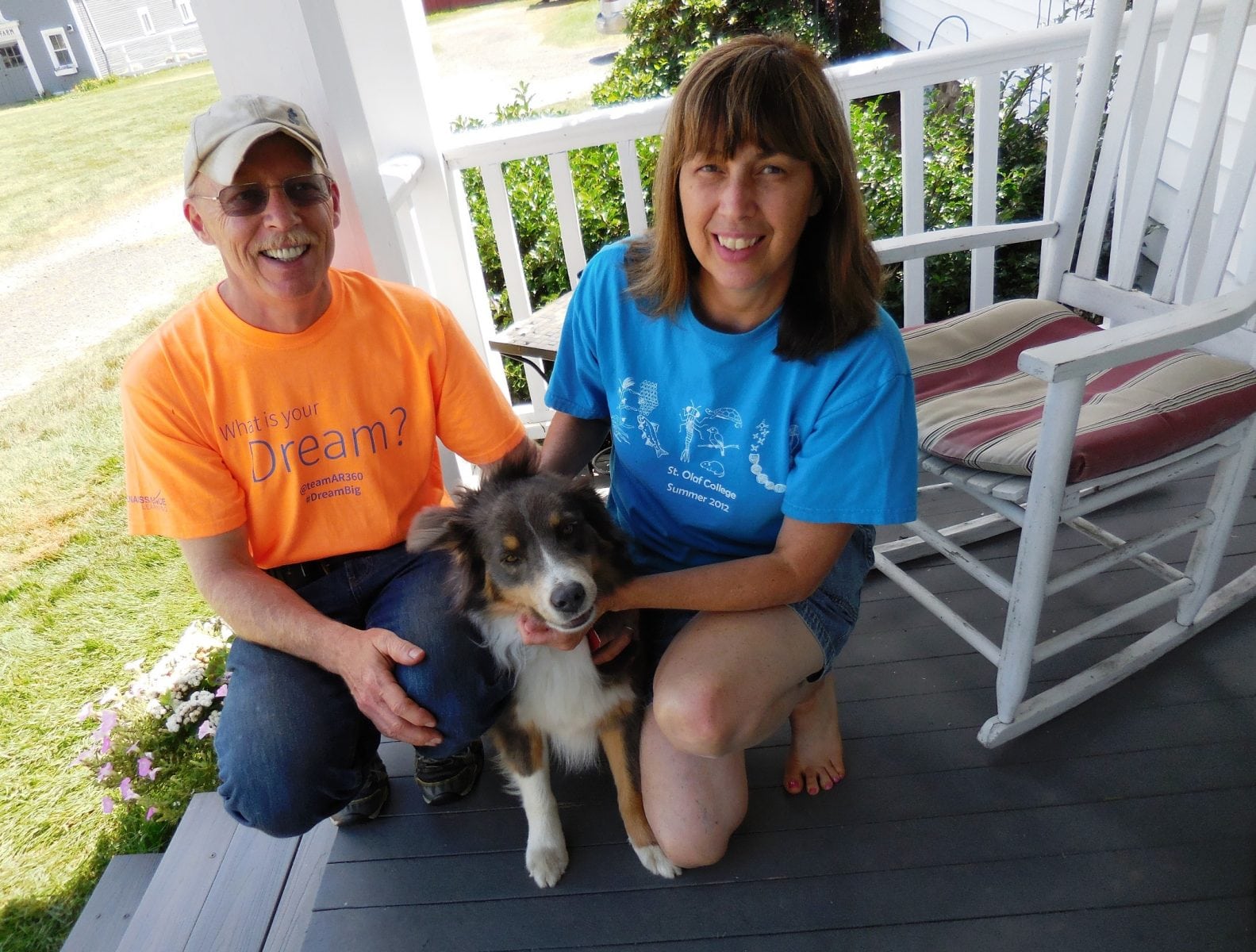 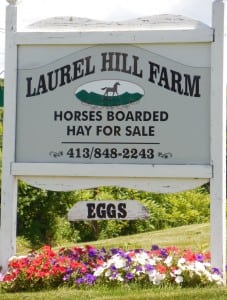 BLANDFORD – Besides being Superintendent of the Gateway Regional School District, David Hopson is the owner/operator, along with his wife Cheryl, of Laurel Hill Farm in Blandford. Laurel Hill is a working farm, selling hay and boarding horses.
This year, the haying presented some challenges.
“It was too dry when the grass should have been growing. Then too wet in June to cut,” Hopson said.
He is still trying to finish the first cut, which is normally done the first week in July. He said they use a couple thousand bales on the farm, and sell the rest. Most years the farm makes a profit, he said. 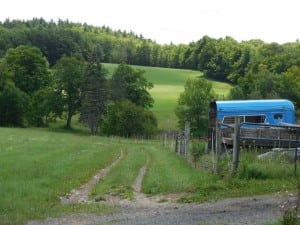 Some of the haying fields on the 60-acre farm. (Photo by Amy Porter)

Besides growing and selling hay, they board horses. Right now they have five, although one is technically theirs, because the owner passed away. Cheryl said that horse is spending his retirement at the farm.
The horse barn is one of the original buildings on the 60-acre farm. Laurel Hill Farm was put together in the 20s and 30s by a Holyoke paper company owner, according to Hopson. 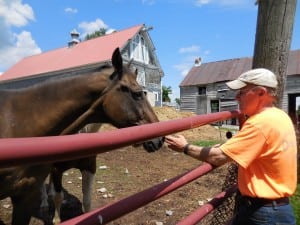 “At the peak, there were 1,500 acres raising Black Angus cattle and Morgan horses.”
He hasn’t changed the name.
The Hopsons also raise sheep. Currently, they have 17 ewes and six lambs. They sent 30 lambs to auction for Easter. Most of the lambs born in the winter go to auction. They also have chickens, ducks and one gander, and grow vegetables and flowers that they start from seed in their greenhouse. 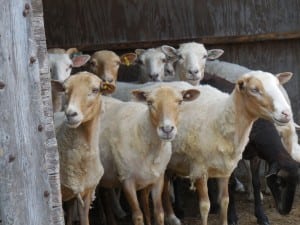 The sheep at Laurel Hill Farm were just sheared. They send the wool to Maine to be processed. Cheryl Hopson and her daughters all knit and crochet. (Photo by Amy Porter)

“The alarm goes off at 5 a.m. – 4:45 in the winter,” Hopson said. “I feed and put the animals out before work.”
He said the longer the day in terms of daylight, the longer the work day.
“Now I don’t put the animals in until 8 or 8:30 p.m., but they still go out after 5 in the morning,” he said.
“I throw a bale of hay out in the morning to give them something to chew on, but the pasture’s wide open,” he said. “The animals are on pasture from April to November.” 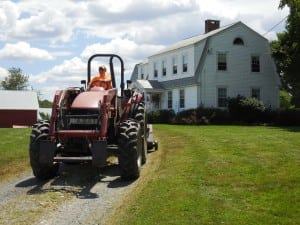 David Hopson going off on his tractor to finish the haying. (Photo by Amy Porter)

During the winter, he feeds them hay from the farm.
“That’s the trick,” he said. “to keep enough hay for the winter.”
“I spend a lot of my vacation time here,“ Hopson said. “I take a lot of half days, rather than a week or two off.”
Cheryl, who also works as a dental hygienist in Westfield, said they do get to go away for vacation occasionally.
“We’re lucky,” she said. “We have one of our boarders who will take care of the barn.” 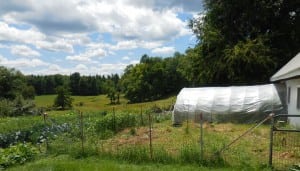 The Hopsons start all of their flowers and vegetables from seed in their greenhouse. (Photo by Amy Porter)

They also have two daughters who can help out. Sarah Hopson, 27, is an elementary math coach in the Agawam school system. Jessica, 23, is starting a graduate program at the University of Calgary, and won’t be as available. Both girls are currently on a cross-country road trip. 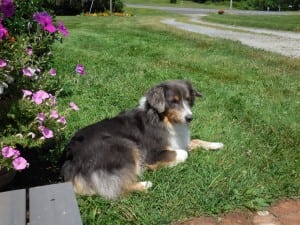 Hopson said he has friends that also help on the farm. He mentioned Mike Wojcik of Blandford, a Vietnam veteran and Silver Star recipient who helps out, along with his kids and grandchildren.
Originally from Westfield, the Hopsons have lived in Blandford since 1978. This is their twenty-first year at Laurel Hill Farm. Before that, they lived for 17 years up the street.
They will be celebrating 40 years of marriage this September. He said they have come a long way since their time overseas, when he served in Stuttgart, Germany in strategic telecommunications. His service helped pay for his graduate and post-graduate education at the University of Massachusetts in Amherst, where he received a bachelor’s in Animal Science, a master’s in Education, and a doctorate in Educational Administration. 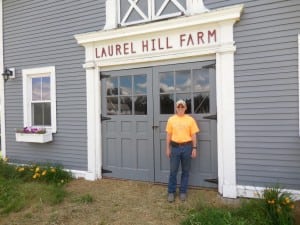 David Hopson standing in front of the Laurel Hill Farm horse barn, one of the original buildings from the 20s. (Photo by Amy Porter)

This will be Hopson’s thirteenth year as Superintendent of Schools at Gateway. Previously, he taught agriculture for 22 years in Connecticut, the last 19 at Northwest Regional in Winsted. Growing up, his mother ran Pine Acres Greenhouse on Furrow Town Road in Westfield, so he was raised in the greenhouse industry.
“We worked in the greenhouse, showed vegetables at the fairs,” he said. “Had some animals.” 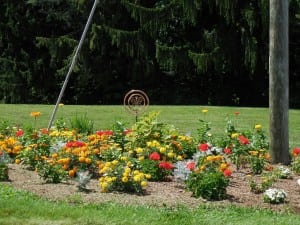 When asked which job is more challenging, Hopson said, “If it’s three o’clock in the morning and you’re working with a ewe that’s having difficulty lambing, that’s a tough time.”
“And then there’s budget season,” Cheryl said.
“I always tell him the farm is his therapy,” she said. “The physical part is a release from everything else he does.”
Hopson said he remembers going to their first Annual Town Meeting in Blandford in the late 70s. The Finance Committee and Board of Selectmen were recommending not passing the school budget. Hopson said his wife Cheryl stood up and asked what they objected to about the budget. They replied that the budget was fine, the town just couldn’t afford it.
“It’s always been difficult,” Hopson said.
Down the road, Hopson, 58, is looking forward to retiring on the farm, and doing “all of those things that I never have time to do – my long list of retirement activities.”