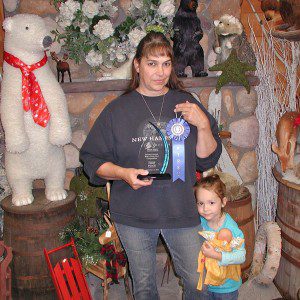 Noreen St. Martin (with granddaughter Addison Parker) with her blue ribbon and trophy, as operator for the well at Gateway Regional in Huntington. (Photo submitted)

In mid-October of 2011, the water system at Gateway Regional was in the news due to a water main break, which resulted in two missed days of school, tanker trucks of potable water being hooked up at the complex, and bottled water issued to students and staff. “It was the first time something ever happened with that well, since it started in 1954,” said Noreen St. Martin, one of the operators for Gateway’s well.

What a difference a year makes.

This month, at a meeting of the Massachusetts Rural Water Association, a water sample from Gateway took first place in the statewide blind drinking water taste test at the MassRWA Annual Trifecta, held at the Northfield Mountain Visitor Center in Northfield, MA.

Noreen and Bernie St. Martin, Gateway’s operators, attended the annual meeting. “It’s a great organization to belong to because they will come out and help you if you have a problem,” Noreen said, adding that Mike Leach had been at Gateway last year on a Sunday morning with equipment designed to detect the location of the water leak. She reported that the organization also offers classes and workshops that give continuing education credits that are needed to maintain their licenses.

The award is all the sweeter because of the problems Gateway encountered with the well just 11 months ago. “I couldn’t think of a better place for this to go, after all they went through last year.” said Bernie St. Martin.

“I don’t think people realized all of the hard work that went into resolving that issue as quickly as we did,” St. Martin said, crediting Mike Leach, facilities director Brian Wing, business manager Stephanie Fisk, superintendent David Hopson, Daniel Laprade and Deirdre Cabral at the Department of Environmental Protection, and many others for going above and beyond to keep school running and repair the system.

As a result of the award, Noreen St. Martin will go to the National Rural Water annual meeting in Washington, D.C. and compete against winners from other states later in the fiscal year.