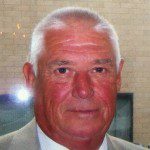 WEST SPRINGFIELD – George R. Rettew, 69, of West Springfield passed away Saturday in Mercy Medical Center. Born in Springfield son of the late Arthur and Hazel (Haire) Rettew.
He attended Springfield schools. George was the co-owner and operator of G&C Automotive of Springfield for several years, retiring in 2004. He coached youth hockey for over thirty years through the Springfield Pioneers, Springfield Junior Olympics, and the New England Junior Falcons. His love for youth hockey was evident in his commitment to supporting his players advance to play hockey in prep school. George was inducted into the Springfield Hockey Hall of Fame as a “Rink Rat”. His life vision was to obtain his captain’s license and charter his own deep sea fishing boat of which he successfully accomplished. George’s passion for the ocean and deep sea fishing has been passed onto his family and friends. He enjoyed spending time with his family, especially vacationing in St. Thomas.
He is survived by his wife of twenty-nine years, Marie (Sadowski) Rettew; two daughters, Lydia Drouliard of Chicopee, and Lisa Zukowski and her husband Todd of West Springfield; three sons, Scott Rettew and his wife Beth of Springfield, Norman St. Pierre and his wife Katherine of Feeding Hills, and Joseph St. Pierre and his wife Beverly of West Springfield; two sisters, Carol Pickett and her husband Paul of New Port Richey, FL, and Nancy VanDerpool and her husband, Bill of New Port Richey, FL. George also leaves nine grandchildren.
His funeral will be held on Thursday at the Firtion-Adams Funeral Service, 76 Broad Street, Westfield at 9:00 a.m. followed by a Liturgy of Christian Burial in Holy Trinity Church, 335 Elm Street, Westfield at 10:00 a.m. Burial will follow at St. Mary’s Cemetery. Calling hours will be held on Wednesday at the funeral home from 5:00-8:00 p.m.
Donations may be made to Dana Farber Cancer Institute, 450 Brookline Ave., Boston, MA 02215.
firtionadams.com