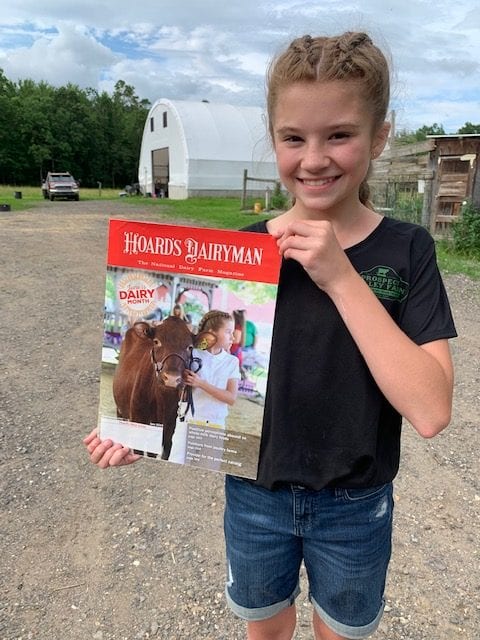 WESTFIELD-For Dakotalyn Phelon’s first birthday she received what many might consider an unusual gift – a cow.

“Fruit Loop is my favorite cow,” said Phelon on the family’s farm which spans 100 acres on the north side of the city. “Fruit Loop was my first cow and she is very protective of me.” 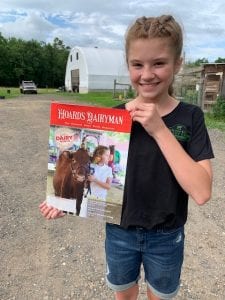 Dakotalyn Phelon of Westfield made the cover of the magazine Hoard’s Dairyman in celebration of June as Dairy Month.

Phelon, who first joined the Wyben 4-H Club when she was 3, couldn’t imagine a better birthday gift and now counts five more cows as her “own.”

The Westfield Intermediate School sixth grader is bullish on her future goals – including being an integral part of the Prospect Valley Farm which is now being run by the family’s fourth generation of farmers. She is the daughter of Shandalyn and Jim Phelon.

Despite Phelon’s petite size, she is eager to show off her skills around the farm – especially handling Fruit Loop, a Milking Shorthorn dairy cow, which can weigh up to 1,800 pounds.

Phelon was among 50 young people, ages 11 to 18, participating in the show, exhibiting cattle and competing in a variety of roles including showmanship. The event was sponsored by the Massachusetts 4-H Dairy advisory group. 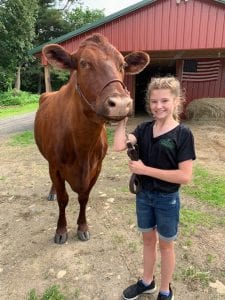 Dakotalyn Phelon shows off her favorite cow, Fruit Loop, at her family’s farm in Westfield.

The mission of Hoard’s Dairyman, first established in 1885, is to supply dairy farmers and their advisers from around the globe with “practical, factual information to assist in all facets of their dairy businesses.” The current issue touted June as Dairy Month.

Maureen Freniere, Phelon’s aunt, actually knew several months ago that Dakotalyn would be featured on the cover but kept the news secret to surprise Phelon and their extended family members.

With school officially out for the summer, Phelon and her sisters, along with several extended family members, will be working the fields and tending to the animals. Chores run the gamut from feeding the cows, chickens, turkeys, sheep, cats, pigs, dogs, a rabbit and a goat, to cleaning their respective enclosures, hay baling, and even driving a tractor.

“I enjoy working on the farm because I am learning new things all the time,” said Phelon.

The family farm was originally established in the 1940’s by Leonard Phelon who then passed on the land to his sons and daughters. In 2000, James and Sheila Phelon took over the operation, and in 2013, Shandalyn and Jim Phelon, Bridget and Andy Rida, and Maureen and Andy Freniere became the new owners.

“This was a dream come true for me,” said Shandalyn Phelon. “Farm work also teaches our kids responsibility as well as where our food is coming from.”

“It’s a real family affair here,” said Freniere. “We all rely on cousins and our kids to give us a hand.”

For Dakotalyn Phelon, she sees a bright future ahead working the farmland.

“I definitely want to work at this farm in the future and I hope my two sisters want to too,” said Phelon. “It is also important for animals to have many people get involved in farming, not just a few people.”

Dakotalyn Phelon shows off her favorite cow, Fruit Loop, at her family’s farm in Westfield.