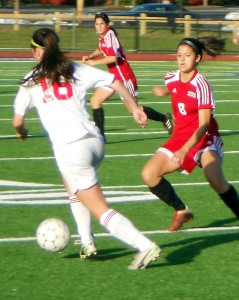 LADY BOMBERS FALL TO TOP-SEEDED SPARTANS
EAST LONGMEADOW – There was no way Westfield was going to avoid playing top-seeded East Longmeadow, barring an upset, so better that the Lady Bombers soccer team play them now versus waiting until the D1 title game.
Right? Right coach?
“We could have gotten a little better if we had had some more tournament play,” Westfield coach Keith Saltmarsh said, following the Lady Bombers 5-0 quarterfinals loss to the Spartans Tuesday. “They’ve got a method to their attack. I thought we could solve it. We were not up to that level today. …They’ve got a good chance to take it all.”East Longmeadow put together a brilliant drive early in the playoff game, capping it off with Sarah Waltsak’s diving header past Westfield goalie Briana Kubik in the 9th minute.
East Longmeadow took a 2-0 lead in the 27th minute on Jess Kazyaka’s low liner into the opposite corner of the net.
Westfield nearly trimmed the deficit in half when Rebekah Santiago did a quick 180 in traffic from about 10 yards out and squeezed a bullet at East Longmeadow goalie Ann Stack. Stack prevailed.
The Bombers had two more chances after finally attempting their first shot on goal with consecutive corner kicks, but the Spartans dodged two more bullets.
Early in the second half, Westfield received two direct kicks – one from Haley Mason and the other from Melissa Welch – but one ball went high and wide, and Stack corralled the second of the two.
East Longmeadow soon responded with its third goal on a header from Devon Wolfenden. Kazyaka and Alyssa Balboni tallied the fourth and fifth goals.
Westfield had a chance to crack the shutout in the closing seconds until a Bombers’ direct kick sailed wide, out into the darkening night sky.
“It’s a tough way to end the season, but I’m proud of the way they developed,” Saltmarsh said. “The result does not show the way we played; this is not a symbol of their season. We played well individually, excelled, and came together as a team this year.”
“We played a high pressure game. We made a couple of mistakes, and with a team of that quality – they bury those opportunities.”

SOUTHWICK PREPS FOR NO. 1 TOO: Southwick’s prize for a quarterfinal win over Sabis is a semifinal matchup against top-seeded Belchertown (12-2-3). The Lady Rams (11-5-2) will take on the Orioles this evening at Westfield State University at 5:30.
“(We’re) working well together,” Southwick coach Todd Downie said. “We’re possessing the ball, moving it well, and not doing anything stupid. We will have to play an even more perfect game to beat Belchertown.”
Although it is the first meeting between the two teams this season, there is a statistic which suggests Southwick can keep it close and possibly pull out the upset. The Rams beat Agawam, who defeated and tied Belchertown during regular season play.
“I have complete confidence our players can play up to that level,” Downie said.

LADY GATORS SEEKING THREE-PEAT: No. 3 Gateway (10-1-3) will attempt to keep its three-peat hopes intact when it takes on second-seeded Granby (13-2-3) this evening at Szot Park in Chicopee. The game is scheduled to begin at 7 p.m.