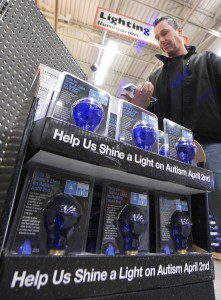 Neil Roache, of Westfield, checks out the “Light it up Blue” light display at the Home Depot store on East Main Street in Westfield yesterday. Home Depot has partnered for the third year to shine a light on autism during Autism Awareness Month in April and World Autism Awareness Day on Tuesday. The special blue light bulb can be purchased for $1.99 with $1.00 from each sale benefiting the Autism Speaks program. Home Depot will donate up to $150,000 as part of the special promotion. For more information on the program log into www.lightupblue.org (Photo by chief photographer Frederick Gore)

WESTFIELD – A global recognition of autism will take place Tuesday, which is designated World Autism Awareness Day.
To mark the day – and April as Autism Awareness Month – Autism Speaks is asking everyone to participate in the Light It Up Blue campaign. People are encouraged to purchase special blue light bulbs, available locally at The Home Depot, to light their homes blue. A portion of every blue bulb goes to Autism Speaks, an autism advocacy organization that sponsors autism research and conducts awareness and outreach activities.
Autism spectrum disorder (ASD) and autism are both general terms for a group of complex disorders of brain development. These disorders are characterized, in varying degrees, by difficulties in social interaction, verbal and nonverbal communication and repetitive behaviors. They include autistic disorder, Rett syndrome, childhood disintegrative disorder, pervasive developmental disorder-not otherwise specified (PDD-NOS) and Asperger syndrome. With the May 2013 publication of the new DSM-5 diagnostic manual, these autism subtypes will be merged into one umbrella diagnosis of ASD.
The number of children diagnosed with ASD has grown to one in 88, with one in 54 boys receiving an ASD diagnosis. For families, the diagnosis can be difficult, but advances in training and resources have grown, along with the number of children diagnosed.
Westfield Public Schools Special Education Director Patricia Byrnes said of the 1,000 students in the system with an Individualized Education Plan (IEP), 123 have a diagnosis of ASD. She said there could be others not yet diagnosed, and there are certainly more students entering the schools with ASD. In fact, the Fort Meadow Early Childhood Center is “bubbling over” with students on the spectrum, she said.
Byrnes said receiving a diagnosis at or before preschool age is progress.
“Pediatricians are able to diagnose earlier, so early intervention (EI) is able to give services earlier,” Byrnes said, adding that EI providers, such as the Westfield Infant Toddler Services, are better able to provide data to schools, which results in more comprehensive services for children.
“The earlier we get them, the better chance they have,” said Byrnes.
For most young children on the spectrum, social skills and speech therapy are the top services. Byrnes touted Fort Meadow’s ability to educate the youngest children in the district while providing the services they need, including Applied Behavior Analysis, which is a type of behavior analysis based on the traditional theory of behaviorism to modify human behaviors as part of a learning or treatment process.
Byrnes said the school department created a partnership with Westfield State University to establish programs based on the May Institute approach. The May Institute is one of the largest providers of services and special education for children and adults with autism and other special needs in the U.S.
The program at Juniper Park is for students in kindergarten through grade five and takes place in two classes. Byrnes said the intense program has been “extremely successful.”
There are three autism consultants in the schools, one works with high school and middle school students, while the other two work in the elementary schools and preschool. Training for teachers with students with ASD is ongoing and Byrnes said differential instruction allows teachers to teach typical students and students on the spectrum, both high functioning and more severe.
“We also have autism specialists that support our general education teachers,” Byrnes said.
Byrnes said she has seen the number of students diagnosed with ASD soar in the past decade, which comes at a cost and while much is made of the cost of special education, part of the reason the cost has increased is simply because the diagnoses have increased.
“We try to meet the needs of all students, whether they have a disability or not,” Byrnes said.
Byrnes said there are many myths about autism, including how people “get” it.
“It is brain-based and the experts are finding more and more evidence it is genetic,” she said.
Many people with ASD have language delays, often the first sign of autism noticed by parents. However, people with high-functioning autism often have an incredible vocabulary at a young age. No two people with autism are alike, but there are common characteristics, with varying degrees.
The following “red flags” can be indicators of autism in young children: No big smiles or other warm, joyful expressions by six months or thereafter; No back-and-forth sharing of sounds, smiles or other facial expressions by nine months; No babbling by 12 months; No back-and-forth gestures such as pointing, showing, reaching or waving by 12 months; No words by 16 months; No meaningful, two-word phrases (not including imitating or repeating) by 24 months; Any loss of speech, babbling or social skills at any age.
Those red flags, listed on autismspeaks.org, are indicative of what people classically think of as autism. Some children, however, show different signs, including being highly verbal, engaging in repetitive behaviors and speech, restricted interests, lack of eye contact and one-sided conversations.
Byrnes said one of the biggest keys to success for people with autism is early intervention, and part of that is educating parents on the signs of ASD and how an IEP can help. She said awareness is so important, which is why the Westfield Public Schools is encouraging everyone to wear blue Tuesday and participate in awareness events throughout the month.
For more information on ASD, and the Light It Up Blue campaign, visit autismspeaks.org. Byrnes said she welcomes questions about autism and the programs offered at the schools.