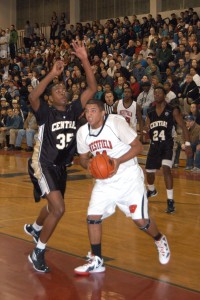 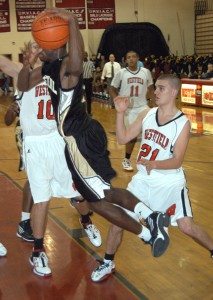 Westfield and Central battle for the ball. (Photo by Chris Putz) 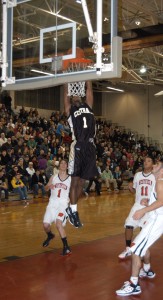 All the Bombers can do is watch, as Tyrell Springer dunks the ball in the waning seconds of the first half. (Photo by Chris Putz)

WESTFIELD – There is a new team soaring through Western Massachusetts picking off its prey one by one.
The undefeated Central Golden Eagles swooped into Westfield last night, and left with a resounding 81-49 victory over the Bombers. It was a win that will reverberate all throughout the region.
“It has been five to six years, maybe more than that (since we’ve been beaten like that),” Westfield coach Bill Daley said. “This was a measuring stick to see where we’re at – we failed for sure.”
Westfield, runners-up to Northampton and East Longmeadow in the last two D1 championship games, had beaten Central in five of the last six meetings. But last night, the tables were turned.
Central opened the game with a 15-5 run, and led by as many as 18 in the first half before Westfield cut the lead to 13. Two quick turnovers just before the half turned into a pair of Golden Eagles dunks and a 37-20 lead.
Tyrell Springer, who had 20 points in the first half, added eight more in the third quarter, including a tip-in off a Kamari Robinson miss to take a 46-24 advantage late. Robinson finished with 15 points.
“I thought we took their first punch. I thought we took their second punch. But after their third punch, we staggered,” coach Daley said.
Westfield attempted to match Central’s high-flying attack, which included so many dunks that the rim was still rattling as fans exited the gymnasium. But the Bombers could not keep up.
“The faster we went, the worse we got,” Daley said. “They can play like that. We can’t.”
“I believe right now that they’re best team in Western Mass., and they’re playing really well right now. We’re going to get better and we have the pieces to do it. I hope we remember every fast break, every lay-up, every time we were outhustled.”
Devin Wells led Westfield (2-2) with 15 points. Billy Smith, who is expected to miss 1-2 weeks with a broken nose, finished with 10.
After three games this season, Central’s average margin of victory is 47. The Golden Eagles are now 3-0.