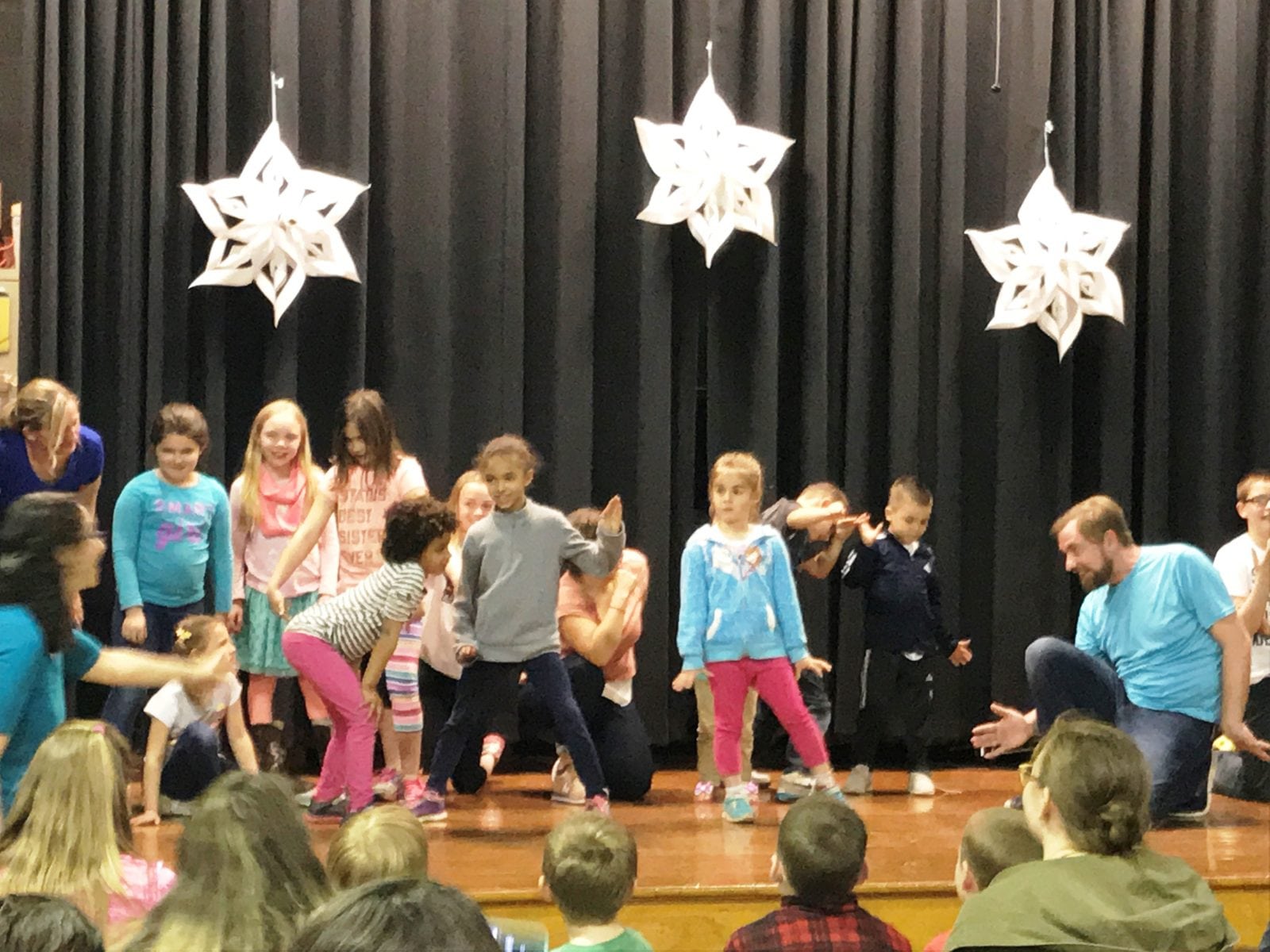 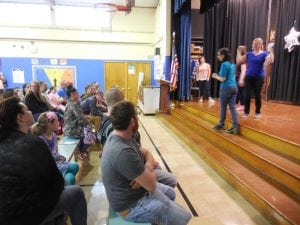 WESTFIELD – On Tuesday evening, the Happier FAMILY Comedy Show came to Abner Gibbs Elementary School for a free family night. Amy Woody of Abner Gibbs PTO said the show was possible thanks to a grant from the Westfield Cultural Center to invite the improvisational group that performs monthly at the Eric Carle Museum of Picture Art.
A six-member troupe, the show was fast-paced and interactive, often asking for ideas from the children and families in the audience to make up their stories and scenes. For a rhyming game, they asked for one syllable names, split themselves up into two teams, and kept going until one side missed a beat on a rhyme. The names offered up included Max, Bob, Joe, Bess and Ben.
The group asked for help with the alphabet in another game, in which two performers acted out playing on a swing set, and had to start each sentence with the next letter of the alphabet which was yelled out to them.
Sometimes words were used from the audience to come up with a story line for a game of charades. Troupe members asked the Abner Gibbs kids to come up with a place to have a party, “strange creek;” who they saw there, “cats;” and the name of a snack, “fries from McDonald’s.” Half of the group then acted out the story, while the other teammate had to guess the story based on the clues. They were way off, in a fun way.
The troupe also asked the audience for a theme for a poem, “brushing your teeth,” and for another story, “lollipops.”
For a segment called Choose Your Adventure Book, the name of a famous person was given from the audience, “Harry Potter,” then someone they knew, “Lana” (Amy Woody’s daughter who helped the troupe when they arrived), and an object, “Nimbus 2000,” (Harry Potter’s broomstick). This story the troupe guessed spot on, representing Lana as a very helpful person. 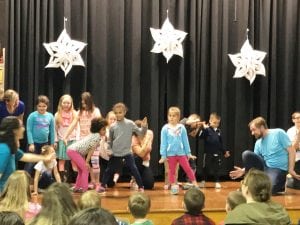 Abner Gibbs students freeze in position on stage during one skit.

The troupe also brought up children in the audience to be the pages in another story. When the pages turned, all the children and some of the troupe members froze in whatever position they were in on stage.
The children were fully engaged during the one-hour performance, and the troupe members energetic and full of fun and silliness.
“The Happier FAMILY Comedy Show is all about maintaining a joyous attitude of acceptance, agreement, and fun. The kids come and have a blast. Meanwhile, they’re also getting powerful demonstrations of teamwork and support where everything is seen as a gift and opportunity for fun,” says Pam Victor, director of the show and Founder of Happier Valley Comedy.
The Happier FAMILY Comedy Show may be seen the third Saturday of every month from 3-4 p.m. at the Eric Carle Museum of Picture Art in Amherst.