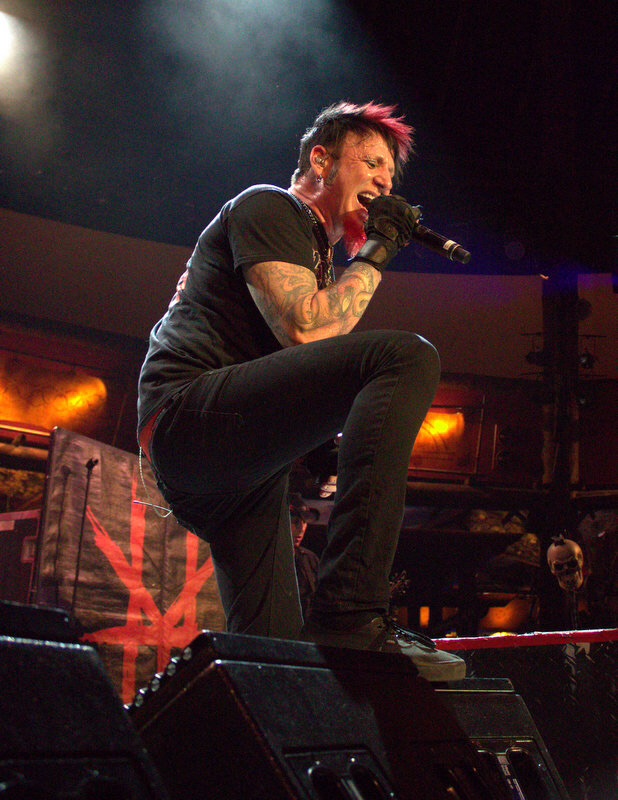 UNCASVILLE, Conn. – Heavy metal rawkers Hellyeah touring in support of their latest release Blood for Blood made a stop at Mohegan Sun’s Wolf Den on Saturday night. This was a perfect intimate place for the fans to get up close and personal with the band.
Hellyeah is a super group of sorts with all the members having been in or currently with different bands. Led by Mudvayne singer Chad Gray, Nothingface guitarist Tom Maxwell and former Pantera/Damage Plan drummer Vinnie Paul these guys have been kickin’ around since 2006.
They opened the show with Hellyeah!, which was off of their 2006 release entitled, believe or not… Hellyeah!
Actually it was a cool song to open the show with. Matter of Time followed that then ripped in to Sangre por Sangre (Blood for Blood) which was the lead single off their latest release of the same name.
With drummer Vinnie Paul and bassist Kyle Sanders providing the thunder and guitarists Tom Maxwell and Christian Brady bringing the lighting, the band was in fine form tonight. Demons in the Dirt and War in Me came next and were followed by another new one and their latest single, Moth. Another one off the new, Cross to Bier (Cradle Bones) rounded out the first half of the set. These new songs are some of the heaviest the band has done over the years, but also some of the catchiest.
The rest of the set consisted of songs from the rest of the bands back catalog and included Band of Brothers, DMF, Drink Drank Drunk, Say When and ending the set with Alcohaulin’ Ass.
Hellyeah took a short break and came back out for a two song encore that included Cowboy Way and You Wouldn’t Know.
This is a veteran band that keeps cranking out great releases and never disappoints live. They will be back at the Mohegan Sun Arena opening for Godsmack on May 10. So go check them out!
Send your comments or suggestions to [email protected] The Rawk Report provides updated concert reviews and news for the New England Area.