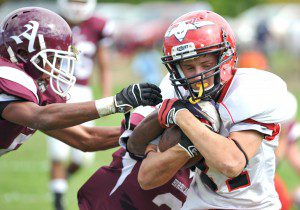 AMHERST – The Westfield High School football team got caught up in a swirl of Hurricanes last weekend in Amherst.
Amherst senior quarterback Justin Carey completed 13 of 22 passes for 214 yards and three touchdowns, and the Hurricanes blew by the visiting Westfield Bombers 46-14 Saturday.
Carey threw scoring passes of 20, 4, and 38 yards.
Senior halfback Quinn Barbeito provided Westfield’s lone bright spot, rushing for 98 yards and two touchdowns on nine carries. Barbeito also showed some hands, hauling in an eight-yard pass from junior quarterback Jake Toomey late with the game well out of reach.
“It’s all my fault,” Westfield coach Bill Moore said after the game. “I need to do a better job coaching.”
Moore’s team was not helped by the fact that fullback Ben Geschwind was sidelined with a knee injury. Junior offensive lineman Corey Ward exited with a major injury too.
In the first quarter, Westfield (0-2) raced out to an 8-0 lead.
Cody Neidig gave the Bombers outstanding starting field position with a 68-yard kickoff return to the Amherst 18-yard line. Five plays later, Barbeito scored from seven yards out to take the game’s first lead with 10:21 remaining in the opening quarter. Toomey added a 2-point run.
Amherst (1-0) wasted little time bouncing back.
Carey completed a 28-yard pass, Kieran Presley ripped off a 14-yard run, and the Hurricanes’ quarterback tossed a 19-yarder before Brandon Rivera scored on a 14-yard run with 9:00 left in the quarter. Westfield blocked the extra point.
Amherst’s defense clamped down, forcing the first of two safeties with 5:51 on the clock to tie the game 8-8. The Hurricanes received the free kick, and took over at the their own 45. Two plays – a 26-yard passing strike and a Markus Rivera 29-yard scoring run – and the score was 16-8.
Westfield’s offense stalled several times while Amherst’s offensive machine kept chugging along.
Three plays into the second quarter, Westfield fumbled the ball just outside the red zone. Amherst took over on the own 24. The Hurricanes put together a 10-play drive, which culminated in Carey’s 20-yard touchdown pass to senior Isaiah Davis-Toledo. A two-point pass made it 24-8.
Westfield fumbled the ensuing kickoff deep in its own territory. Amherst took over at the 14, and soon took a 30-8 lead when Carey connected with sophomore Taj-Amir Torres on a short 4-yard TD pass with 2:51 left before the half.
Westfield’s next drive stalled, but Amherst turned the ball back over on a fumbled punt. The Bombers took over on the Hurricanes’ 25 and needed just two runs from Barbeito – one for 5 yards and the other a 20-yard TD jaunt with 54 ticks left – to climb within two scores, 30-14.
The second half did not feature much of a reprieve for Westfield.
Amherst marched the ball 75 yards down the field after the opening kickoff, and scored when Carey found senior wideout Austin Cunningham streaking toward the corner of the end zone for a 38-yard touchdown strike.
After a 3-and-out for Westfield on its next series, Amherst covered 85 yards in six plays. The Hurricanes made it 44-14 when senior back Devon Clark took his second carry of the game 48 yards across the goal line.
Another safety, late in the third quarter, resulted in Amherst’s final scoring play.
Notes: The game was originally scheduled to be played Friday night, but the threat of Eastern Equine Encephalitis and West Nile Virus in mosquitoes forced the kickoff to be moved to noon Saturday.