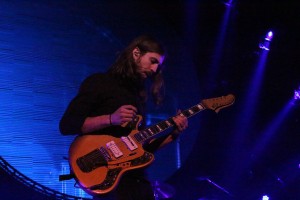 UNCASVILLE – Touring in support of their massively successful 2012 release, Night Visions, Imagine Dragons stopped at Mohegan Sun on Saturday night for a sold out show. Having sold over 2 million copies, Night Visions has put Imagine Dragons on the music map, from playing small clubs to headlining arenas in a very short period of time. The band has already claimed a Grammy, an American Music Award and a Teen Choice Award (this was evident by the amount of teenagers in attendance and by the line-up of parents waiting for their kids after the show).
Drums of all shapes and sizes seemed to be the main theme for this evening. The Dragons opened the show with the song Fallen and had each member manning some type of drum on the stage. The band quickly moved into Tiptoe and Hear Me before really addressing the crowd. Lead singer Dan Reynolds got everyone involved for an audience sing-along for one of the hits off Night Visions, called It’s Time, which can also be heard in a couple of television commercials.
Interspersed throughout the set, there were plenty of solos. A guitar, bass and actually two drum solos filled in a decent amount of time during the show, which frankly seemed to slow any momentum the band gained while playing their songs. Having only one full album and a handful of EPs, the band’s song selection which is fairly limited, keeping the set to a quick ninety minutes. 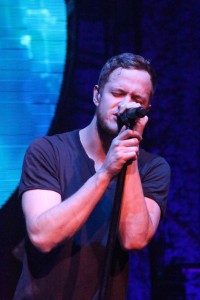 The songs Who We Are, The River, Amsterdam and Cha-Ching (Til We Grow Older) came next in the set. Singer Reynolds proceeded to explain to the crowd the type of music he grew up on, which was mostly 1970s-era rock bands, and was the lead-in for a cover of Rush’s Tom Sawyer. Reynolds did his best job at trying to hit some of those high notes in the song, but came out sounding a little off. He bounced right back with an impromptu cover of Blur’s Song #2. This had the crowd fired up and singing to the song’s chorus.
The next song, 30 Lives, was introduced as a dedication to a 17-year-old fan Tyler Robinson whom the band befriended and died of cancer in 2013. In recognition of this Imagine Dragons has started The Tyler Robinson Foundation that helps young people battling cancer.
A bass solo preceded their second biggest hit, Demons, which was then followed by the second drum solo. The reggae-fueled On Top of the World came next before the band launched into the song that was recognized as the number one song in 2013, Radioactive. This had the crowd passionately singing the song while the band played along. Imagine Dragons encored with Nothing Left to Say.
This was an entertaining night for fans of the band. I am thinking once the band releases another full length album, their shows will be able to sustain momentum and limit the number of filler events (solos) that seemed to really slow things down this night. Led by charismatic lead singer Dan Reynolds, the band has some anthem type songs and with another solid release will have them playing in arenas for a long time to come. I assume we will be hearing a lot more of Imagine Dragons in the coming years.