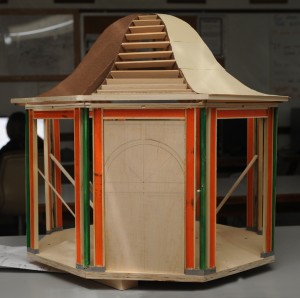 A scale model made by Westfield Vocational-Technical High School students of a pavilion to be constructed on the newly renovated Park Square illustrates the details of the structure (Photo by Carl E. Hartdegen)

Pavilion project
continues slowly
By CARL E. HARTDEGEN
Staff Writer
WESTFIELD – A pavilion to grace the city’s soon to be reconstructed green took another step toward reality Monday evening when the members of the city’s Parks and Recreation Commission voted unanimously to approve funds to pay for a contract revision needed for the structure.
City Engineer Mark Cressotti appeared before the commission at their regular meeting to request approval for $12,770.47 to pay for modifications to the foundation for the pavilion.
Although Cressotti could not provide an exact figure for the balance in the project’s contingency fund he said “There’s still several hundred thousand (dollars) out there to build the pavilion.” He explained that ten percent of the original $1.8 million bond to fund the city’s share of the project had been earmarked for the contingency fund.
The commission approved the outlay he was asking for with the stipulation that the amount could not exceed the contingency fund balance.
The initial cost proposed for the structure was more than $500,000 but, even when the cost was reduced to $350,000, the city council and residents balked and the decision was made to drastically reduce the cost of the structure by utilizing students at Westfield Vocational-Technical High School to do much of the construction.
Brian Falcetti, an instructor in the construction technology department at Westfield, explained in an earlier interview that the foundation needed to be modified with additional footings with installed anchor bolts because the structure is planned to be have much longer usable life than many buildings currently being constructed.
He said that structures such as shopping centers are expected to last only about 20 years before they are demolished so less care is needed to protect structural steel from rust and corrosion. In that type of construction, he said, the steel is typically buried where it is in contact with moisture and subject to decay.
For a structure with a much longer projected life, like the pavilion, he said, it is a better plan to anchor the steel elements to pads built onto the top of the foundation so the steel is above the water table and less liable to be compromised by corrosion.
He also said that the pavilion will not be completed before the school year ends.
He said that the detailed design for the structure, which is being created by engineers at Tighe and Bond, is not yet complete but is expected within three or four weeks.
After that, he said, it will take six to eight weeks to complete the bidding process and assemble the materials for the project.
And, once those hurdles are overcome, the student crew will not go to work until the professional crew completes their work so the pavilion construction is not expected to start until mid April or early May, four to six weeks before the end of the school year.
Falcetti said “We anticipate that once we get going it’ll take about four weeks to get the shell up.”
He said the students’ contributions to the project will be completed in the fall when the students return to school.
Cressotti said after the meeting that he expects the structure can be made weather tight before the school year ends so he is not overly concerned if the project is not completed until the students return in the fall.
However, he said that he would like to see the steel for the structure erected before the rest of the work on the Green is completed.
He explained that the heavy equipment required to emplace the steel beams which will comprise the structural elements of the pavilion could impact the stone walkways and other elements of the reconstruction effort on the Green so he would like to see the steelwork done before the contractors complete their part of the work.
Falcetti said that the juniors and seniors in the construction program will each make up a crew to work on the project.
He explained that students at the school spend every other week in the classroom but, with the two crews, work on pavilion will be continuous as one crew will be working on the site while the other is in the classroom.
“They’re pretty excited to be involved in the project” he said.

Carl Hartdegen can be reached at [email protected] 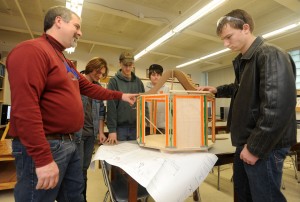 Brian Falcetti, left, an instructor in the construction technology department at Westfield Vocational-Technical High School, explains some of the features of a pavilion planned to be built on the city's newly reconstructed Park Square to some of the juniors who will be involved in the construction - Danny Rust, Noah Cousineau, Devon Drewniany and Valentin Covileac. (Photo by Carl E. Hartdegen)