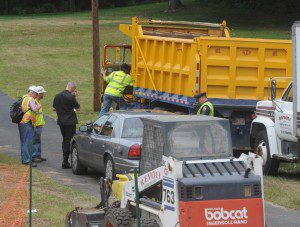 An OSHA inspector checks out the interior of a ten wheeled dump truck which struck and killed Westfield Police Officer Jose Torres July 27, 2012, as police investigators and contractor employees investigate the circumstances of the accident. Revoli Construction Co., the contractor for the project, has recently been cited by OSHA as a result of the investigation. (File photo by Carl E. Hartdegen)

WESTFIELD – Officials of the Occupational Safety and Health Administration have completed their investigation into the circumstances of the death of veteran Police Officer Jose Torres at a construction work site last July and have informed city officials that the contractor involved has been cited by the federal agency.
Torres, a 27 year member of the Westfield force who was widely respected and well liked, was killed by a large dump truck which struck him when it was backing up at a West Springfield pipeline construction project which crossed Pontoosic Road.
Torres, who had been employed to ensure traffic flowed smoothly and safely in the construction zone, was the first city officer known to have ever been killed while on duty.
His wake, funeral cortege, funeral ceremony and internment drew crowds of police officers from New England and beyond, state officials, including Governor Deval Patrick, and thousands of city residents whose lives had been touched by Torres.
Westfield mayor Daniel M. Knapik was notified Thursday by Mary E. Hoye, OSHA’s area director, of the findings of the investigation by the agency of the the U.S. Department of Labor.
In her letter, Hoye said that Torres “was struck by a dump truck as the truck was backed up.”
Hoye went on to say “The operator of the dump truck had an obstructed view to the rear of the vehicle, however, the dump truck was equipped with a backup alarm as is required by the OSHA standards.”
Nonetheless, a citation was issued to the contractor, Revoli Construction Co. of Franklin, “for lack of training for employees of other employers on the hazards of the worksite.”
In a letter to Shawqi Alsarabi of Revoli, Hoye wrote “Your employee was relying on the ability of the victim to remove himself from harm’s way when he heard an audible alarm on a job site with multiple alarms blaring and other ambient construction noise.”
As a result, Hoye continued, “That put the onus for safety on each individual employee on this job site, when the duty under the OSH (Occupational Safety and Health) act is that the employer furnish a place of employment which is free from recognized hazards that cause or are likely to cause death or serious physical harm.”
Hoye concluded that “The actions taken by Revoli Construction were not sufficient to prevent of the death of Police Officer Jose Torres” and added that “Had a comprehensive safety program been in place and enforced, an accident of this magnitude may have been avoided.”
The citation issued to the company specifically states that “the employer did not instruct each employee in the recognition and avoidance of unsafe conditions.”
The proposed penalty for the violation is $14,000 but the company has 15 working days from receipt of its citation and proposed penalty to comply, request an informal conference with the OSHA area director or contest it before the Occupational Safety and Health Review Commission.
Knapik, whose private sector resume includes “20 years in the trenches” of work zone safety, said that while a company’s record can be “an evaluative tool” when a contractor is considered, “a past citation wouldn’t rule out” a potential contractor.
But, since Revoli Construction was hired by West Springfield for the project in question, he does not have direct knowledge of the contract.
He said that a municipality may bypass a lowest bidder, because of safety or other concerns, but he points out that it is a serious step to take.
He said that Westfield officials have bypassed a lowest bidder during his administration, but said that city employees worked hard to justify that decision.
“You’d have to be ready for a (law) suit”, he said, because “they’re going to contest it.”
Revoli Construction does have past citations.
The relevant citation, issued Jan. 22, is classed as a repeat offense and notes that the company was issued a citation under the same standard in 2011 at a job site in Needham.
A cursory Internet search reveals the OSHA archive records that the agency cited the company in 2005 for a “cave-in and other hazards at Gloucester, Mass., sewer installation project” and a fine of $115,900 was proposed.
At that time, an OSHA official noted that “Revoli has been cited nine times in the past dozen years for not providing cave-in protection.”
In an unrelated case, a fine of $49,000 was proposed against the company by OSHA in 2006.
According to reports published in Kingston and elsewhere, the company was cited after a company excavator made contact with an energized overhead power line and delivered an electrical shock to a Kingston police officer who had been working at the job site in much the same way Torres was.
That officer, Sgt. Tim Ballinger, said in a brief telephone interview Friday that his injuries kept him out of work for two and a half years, required several surgeries and has left him with permanent physical impairments.