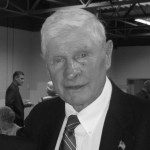 WESTFIELD  –  John Kurty passed away on November 6, 2012 surrounded by his family. John was a well-known and highly respected coach and mentor, primarily at Ludlow High School and Westfield State University. His impact and influence on the students he taught will be long remembered. Born in Ludlow, MA, he was predeceased by his brothers, William and Alexander. John was a WWII veteran who served in the Pacific. He leaves Rita, his wife of 57 years; son, Jack; daughter, Carol, and her husband, Hal.
Coaching the Westfield men’s soccer team from 1966 to 1977, John compiled a brilliant record of 153 wins, 36 losses and 13 ties. He was the first coach inducted into the Westfield State Athletics Hall of Fame in 1994 as a member of the charter class. At the time of his retirement, his .790 winning percentage was the highest of any coach, active or retired, in all New England divisions. John led the Owls to five straight NCAA Tournament appearances and three New England state Championships. Coach Kurty’s 1974 team finished third in the nation. ??John coached the Ludlow High School soccer team to a ten-year record of 150 wins, 19 loss and 19 ties including three consecutive state championships. In 2007, he was elected into the Ludlow High School Sports Hall of Fame, both as a player and as a coach. John graduated from Penn State University where, as a standout athlete, he was a member of two NCAA national championship soccer teams. He played semi-professional baseball in Nova Scotia. Over many years was an avid golfer, soccer referee, and umpire for local high school and college baseball games.
In his retirement John spent time with his family in Westfield and Ft. Myers, FL. He traveled extensively with his wife, enjoyed longstanding friendships developed through athletics, and worked on numerous projects that were of great assistance to others. He was passionate about fitness pursued through healthy living and exercise and about helping his friends and family achieve success and happiness.
Visiting hours will be held on Sunday, November 11, at Firtion-Adams Funeral Home in Westfield from 1:00 p.m. to 4:00 p.m. A mass will be offered at 10:30 a.m. on Monday, November 12th at St. Mary’s Catholic Church, followed by a luncheon at the Scanlon Banquet Hall at Westfield State University. Burial with military honors will be at 10:00 a.m. on Tuesday, November 13, at Massachusetts Veteran’s Memorial Cemetery in Agawam.
In lieu of flowers, contributions may be made to the Coach John Kurty Scholarship Fund, c/o Westfield State Foundation, P.O. Box 1630, Westfield, MA 01086-1630.
firtionadams.com