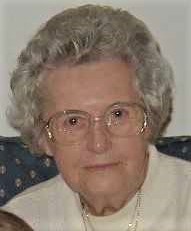 Katherine Kane Sullivan passed away at Mount Saint Vincent Care Center in Holyoke Aug. 1st at the age of 104, just weeks short of her 105th birthday. Kay was the first born of Irish immigrants, Eugene Kane of Clahane, Castlegregory, Co. Kerry, Ireland and Hannah (Landers) Kane of Bollincolla, Ballyferriter, Co. Kerry, Ireland. Kay was born in Westfield and attended Westfield schools. She worked for Schwer’s before World War II. For many years she was the supervisor of telephone operators at Noble Hospital.

She was predeceased by her parents, her husband H. Joseph Sullivan who died in 1984, and her sisters Anna and Mary (Kane) O’Connor. Kay’s two brothers John and Eugene Kane, both were killed four months apart in France in 1944, their bodies were never recovered. She was also predeceased by her two grandsons Eugene John and Sean Patrick Sullivan, her great grandson Nathan Fillion, and her niece Janice Lane. Kay was a member of Our Lady of Blessed Sacrament Church in Westfield for 101 years, and also where five generations of her family worshiped. She belonged to the Daughters of Isabella’s, Rosary Sodality, Sons of Erin Aux., and the Senior Center.  She is survived by her son John Eugene Sullivan and his wife Diana of Westfield, her daughter Margaret (Sullivan) Moran and her husband Steve of Florida. She also leaves her five grandchildren, Christie-Ann Fillion of Westfield, Judy Sullivan of Monson, Patrick Sean Sullivan of Westfield, Joe Moran of Charleton, and Jim Moran of Dracut, her beloved ten great grandchildren Caitlin and Carissa Fillion, Sean Patrick and Declan Fitzgerald Sullivan, Grace, Erin, Kate Moran, Madison, Michael and Sean Moran. She also leaves 2 nieces and one nephew, and six grand nieces and a nephew, six great nieces and cousins in Ireland. Kay was a devout Catholic who turned to her faith in good and bad times. She was extremely proud of her Irish-American heritage, and these attributes she passed on to her children, grandchildren, and great grandchildren. Kay’s family would like to thank Mount Saint Vincent Care Center for the wonderful and loving care Kay received there for almost five years. Especially the staff on the first and third floor. They also want to thank Fr. Dan Pacholec and the Parishioners of OLBS for their kindness. Her funeral will be held on Monday, August 5th at 9 am from the Firtion-Adams Funeral Service, 76 Broad Street, Westfield followed by a Mass at 10 am in Our Lady of the Blessed Sacrament Church. Burial will follow in St. Mary’s Cemetery. Calling hours will be held Sunday at the funeral home from 2-5 pm. In lieu of flowers, contributions can be made to OLBS Mortgage Acct, P.O. box 489, Westfield, Mass, 01085, or to Mount Saint Vincent Care Center Activities Acct., 35 Holy Family Rd, Holyoke, Mass, 01040.