“Last year’s drought showed how precious and vulnerable our water resources are, and how important it is we act proactively to protect these resources and the wildlife that rely on them,” said Governor Charlie Baker in making the announcement. “These innovative local projects will improve water quality across the state and make our natural resources more resilient to the effects of climate change.”
Trout Unlimited received $38,600 to remove two impassable instream barriers and reopen more than 10 miles of up and downstream access of interconnected cold water habitat on Kinne Brook, a tributary to the Middle Branch of the Westfield River located mainly in Chester and on the edges of Worthington. 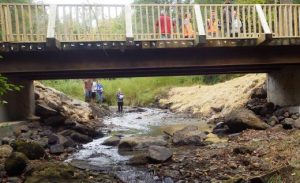 Kinne Brook in Chester, where a dam on private land was removed in 2015. (Trout Unlimited photo)

Rodgers said the two culverts both washed out during Tropical Storm Irene, but (per FEMA) were replaced with similarly undersized culverts, “which means they’re just as likely to wash out again if another flood passes through the area,” she said. The two culverts also have a large drop at the downstream end that prevents fish from moving from Kinne Brook into those tributaries, essentially cutting off miles of upstream habitat for brook trout to go to spawn and lay eggs.

Rodgers said Kinne Brook is listed with the state as an Outstanding Water Resource and has a good population of native eastern brook trout among other important coldwater fish species. However, electrofishing survey results prior to the current project showed declining native fish populations on Kinne Brook tributaries. 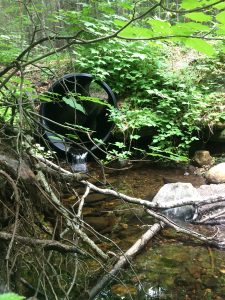 Outlet to the culvert from Skunk Brook tributary that will be removed and replaced with the grant this fall. (Trout Unlimited photo)

Rodgers said Trout Unlimited has been working with the Massachusetts Department of Ecological Restoration with supporting funds from the National Fish and Wildlife Foundation, US Fish and Wildlife Service, Eastern Brook Trout Joint Venture, Orvis’s 10,000 Mile Campaign, the Wild and Scenic Westfield Community Grant and now the Massachusetts Environmental Trust to redesign and replace the two remaining undersized structures. One of the structures is on Skunk Brook and the other is on an unnamed tributary to Kinne Brook.

According to Rodgers, at this time both structures have been redesigned to accommodate fish passage for all species and to be able to pass large floods without washing out and destroying the road. The 4-foot plastic pipes installed by FEMA that ran underneath the road, also created a big drop at the outlet preventing fish access. These culverts will be replaced by new structures that Rodgers said are essentially “no bottom 3-sided boxes that can pass a lot more water during flood season.”

Rodgers said the MET grant will replace the first culvert on Kinne Brook, and allow for restoration and bank plantings. “They are in the process of being reviewed by permitters before we are given the final OK to go ahead with construction. We are planning on going to construction and replacing the culvert on Skunk Brook this fall and follow up with construction on the culvert on the unnamed tributary in the summer of 2018 (pending some additional funding),” she said. 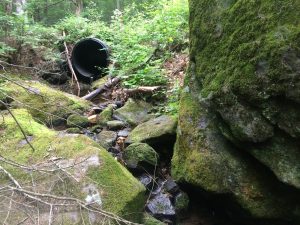 Outlet of the culvert to the unnamed tributary that will be replaced next year. (Trout Unlimited photo)

The area surrounding Kinne Brook is well preserved — more than 60 percent of the land area is conserved, according to the Trout Unlimited Kinne Brook project page. This long-term protection was a key element for Trout Unlimited as they decided to work in the Kinne Brook watershed. They also collaborated with the environmental science department of Westfield State University in a two-year study which showed that the insect populations within Kinne Brook prior to the dam removal were diverse, healthy and productive, meaning the fish populations should rebound quickly now that stream connectivity is being restored and the riparian area improved.

Other grants in Western Mass announced on Tuesday included $40,500 to the Connecticut River Watershed Council in Greenfield. The award will fund the second year of a 3-year project to launch and sustain freshwater mussel restoration in the Connecticut River Watershed, with emphasis on the endangered brook floater mussel.
UMass Amherst was also awarded $94,375 to develop a water isotope mapping tool for fingerprinting sources and understanding drought impacts. The data will be incorporated into a public domain for assisting water managers and watershed stakeholders in assessing the sustainability of freshwater recourses.

Massachusetts Association of Conservation Commissions (Statewide) was also awarded $35,000 to research, write, and publish the Massachusetts Wetlands Buffer Zones Guidebook, a resource on regulating activities in the buffer zones of wetlands and other water resources that will provide model wetland bylaws, ordinances, regulations, and policies that municipalities and conservation commissions can adopt and adapt for buffer zones. The project fills a gap in protecting wetlands and water resources, as there is no definitive source for regulating work in areas that buffer wetlands and other water resources.

The Massachusetts Environmental Trust grants are funded in part through the purchase of specialty environmental license plates featuring the Right Whale, the Leaping Brook Trout, and the Blackstone Valley Mill.

“These grants are important investments to protect and enhance natural habitats and environmental quality throughout the Commonwealth,” said State Representative Stephen Kulik (D-Worthington). “I thank the thousands of citizens who support the Environmental Trust by purchasing special license plates, and also the Baker-Polito Administration for making sure that all parts of Massachusetts will benefit from these projects.”