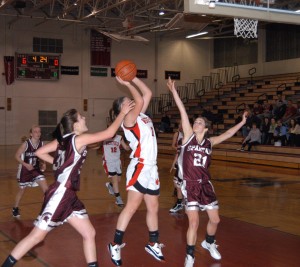 Monument Mountain players converge on Westfield’s Keri Paton (24), who rises above the defense to convert a low-post basket Monday night at home. (Photo by Chris Putz) 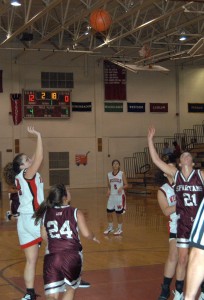 Bombers’ Evonne Tapases, far left, floats a high-arcing shot toward the basket for a first-half basket. (Photo by Chris Putz) 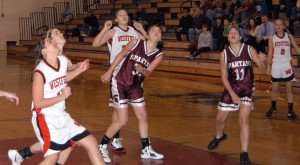 Players from Westfield and Monument follow the path of the ball. (Photo by Chris Putz)

WESTFIELD – The Westfield High School basketball program has some competition within the walls of its own gymnasium.
For the last two years, Westfield’s boys’ hoops team has made a habit of making a run deep within the Western Massachusetts tournament as the female student-athlete body and others cheered them on. The boys better get their vocal chords ready.
For the first time in recent memory, the Lady Bombers are off to a 2-0 start.
The Westfield girls’ basketball built a couple of sizeable leads and held off a late Monument Mountain rally to win 50-41 Monday night at home.
Westfield went on a 14-0 run to start the game. Monument fought back a couple of times in the second quarter, but Bombers’ Bekah Santiago hit a pair of opposite corner 3s to maintain a double-digit lead.
Santiago, Evonne Tapases, and Keri Paton scored eight points apiece in the first half as Westfield distributed the ball evenly, also getting solid ball movement from players such as Melissa Welch. Santiago finished with a game-high 15.
Monument closed to within five points in the third quarter, 28-23, but Santiago hit a floater in the lane off the glass to halt the comeback attempt. Then Sydney Ezold nailed two big buckets, and freshman Alicia Arnold came off the bench to drain a 3 and a layup, the later off a Santiago steal and assist to make it 39-23 late in the quarter.
But Monument would not go away.
Westfield made sure it would not be a monumental-sized comeback. With just under four minutes remaining, Monument pulled to within three 41-38. Ezold responded with a big 2-point basket.  Jen Begley made an even bigger 3 to trim the lead to two.
Ezold continued to sizzle though, responding with a 2 from the top of the arc with 40 ticks remaining. Santiago converted two free throws and an and-one in the waning seconds to preserve the victory.
“My adrenaline got kicking and I tried to make as many shots as I could to win the game,” said Ezold, who finished with 10 points, all in the second half.
As for the 2-0 start, Ezold said: “It feels great. We have a way better attitude than last year. We’re younger, but we’re determined to show what Westfield’s got.”
Another freshman, Kayleigh Kennedy even got a chance to see her first varsity action. Kennedy converted a low-post basket in the first half.