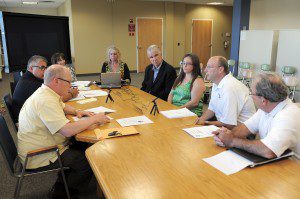 WESTFIELD – A License Commission meeting at The Westwood last night didn’t turn out quite how the ownership group at FL Roberts had hoped.
In a unanimous 2-0 decision, the City’s License Commission voted to hold off on approval of the company’s request for a beer and wine package store license for its South Maple street location.
Ray Cross, FL Roberts’ district manager, presented the company’s case to the commission, saying that the company has beer and wine licenses for three of it’s locations, and was recently approved for another at its store in Whately.
“We want to meet our customers needs. We’ve received requests. We have the car wash, the Jiffy Lube, the convenience store. We want to make this a one stop shop for our customers.” Cross said.
The group also presented layouts showing how the store would look if granted a license, and said they would train all employees to make the South Maple Street store a strict operation, employing a “Fenway Park mentality”.
The board ultimately decided to table the request for a month to enable the commission to evaluate all the other goings-on in the city regarding licenses.
“I have no doubt that FL Roberts would have a good handle on things, but there are things we must look into,” said License Commission Chairman Christopher Mowatt. “We don’t want to open the box and let everything fall out.”
The request will be reevaluated at the Commission’s next meeting on September 9.