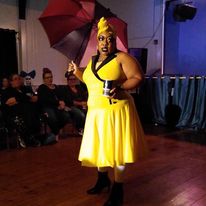 Monica Inita Sign Monroe is bringing their Drag Night Out show to Hutghi’s at The Nook this fall. (THE WESTFIELD NEWS PHOTO SUBMITTED)

WESTFIELD – Get ready for a fabulous night of singing, acting and fun when Drag Night Out comes to Hutghi’s this fall.

Monica Inita Sign Monroe, owner of Monica Monroe Entertainment, is bringing their show to the city Sept. 4 and Oct. 2.

“At this time I mainly produce a drag show called Drag Night Out. This show is my baby,” said Monroe when asked about their occupation. “I do have some other shows/events that will be coming about soon.”

The West Springfield resident started performing in drag in October 2018 via a drag competition called D’oeuvres Court in Holyoke.

“That show is produced by my drag parent Hors D’oeuvres. I did not win that competition, but I had the best time in the dressing room with more seasoned drag performers, performing, interacting with the audience, and hearing the feedback from the judges,” said Monroe. “Thinking about that first performance still excites me now. I have grown a lot in my drag since then.”

Prior to COVID, Monroe was looking for a local venue for their show and discovered Hutghi’s at The Nook on Franklin Street. It was the perfect place, they said.

“Drag Night Out was due to start at Hutghi’s in March of 2020. Due to the pandemic, that was unable to happen,” said Monroe. “When I went to check out Hutghi’s, in the winter of 2019, early 2020, the vibe was just perfect for what and where I wanted to host a show. The owners were great and a variety of ideas came about. The fact that it is handicap accessible was great too.”

Monroe said it was the perfect home for Drag Night Out.

“Hutghi’s was just the place for Drag Night Out to call home,” they said. “When the world started to open up again, I reached out to the owners again of Hutghi’s to make sure we can still make this a go, he was just as excited as when we first met, and the dates were set. I actually had my cast picked for both September and October shows within a couple of weeks.”

Each show will have 12 performances by performers hand-picked by Monroe. All of the performers will bring something different to each performance.

“The audience can expect to be taken along 12 different stories during the night. They will laugh, scream, cheer, and will leave with a smile on their faces,” said Monroe.

Monroe said they wanted to bring Drag Night Out to Westfield because it’s close to home and they spend a lot of time in the city. There are no regular drag shows in the area and Monroe noted that Westfield is an LGBTQ-plus friendly community.

Monroe has hosted two shows in Westfield in the past and was well received.

“I think it is great. It is heartwarming,” said Monroe of the warm welcome they received. “It makes all the hard work feel worth it. The performers that are coming out to perform are excited to either perform again with Drag Night Out or are performing for the first time in Westfield at Drag Night Out.  I hope that the city continues to have welcoming arms to the show and other events.”

When Monroe first posted that they were planning a drag event in Westfield, there were many positive comments despite the lack of show details at that time.

“I was surprised by so many positive reactions because the flyer is not even out for the September show,” said Monroe. “About an hour or so before I posted about the show in the forum, I had just given my drag sibling, Loo D’Flyest Priestly, the information to make my flyer for the show. I did not put much detail in the original post. It was just a hey, this is coming up kinda thing. I knew it would be accepted but was not expecting people to want to buy tickets before seeing the flyer.”

The first two shows are scheduled for Sept. 4 and Oct. 2, 2021. Doors open for both shows at 6:30 p.m. with a show start time of 7 p.m. and ending around 9 p.m. There will be an intermission half-way through the show. Tickets are $15 per person. Tickets can be purchased at www.monicamonroeentertainment.net.

Monroe said they hope people come out and support the show. Follow Monica Monroe Entertainment on Facebook for show updates and more.