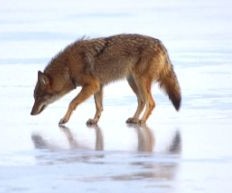 The following information comes directly from the Massachusetts Division of Fisheries and Wildlife (MassWildlife). The eastern coyote moved into the central and western regions of Massachusetts in the 1950s and now lives in every town in Massachusetts, except for those on Martha’s Vineyard and Nantucket. The coyote population spread throughout Massachusetts because they are well-adapted to changes in the landscape and they can now be found within rural, suburban, and urban areas. Therefore, almost all citizens in Massachusetts live in close proximity to coyotes. This phenomenon is not isolated to Massachusetts; coyotes are established throughout all of the United States.
Description
Coyotes are the size of a medium-size dog, but with longer, thicker fur. Coyotes have a long, bushy, black-tipped tail that is usually carried pointing down. A coyote is typically 4-5 feet in length, from snout to tip of tail. Their snout is long and slender, and their ears are pointed and erect. The pelts of coyotes in Massachusetts range from grayish-black to blondes, light tan, dark tan, red or even all black. Females weigh an average of 33-40 lbs and males are slightly larger (average 34-47 lbs). Coyotes can attain weights of 50-60 lbs. Because of their thick fur, weights of coyotes can easily be over-estimated.
Due to their canid-like appearance, domestic dogs, red foxes and grey foxes are often mistaken as coyotes. At first glance, eastern coyotes can have a German Shepard-like appearance, leading to confusion about their identity. Further complicating correct identification is that red and gray foxes can have coat colorations similar to that of coyotes.
Food
Coyotes are opportunistic feeders, meaning they will feed on whatever is most readily available and easy to obtain. Their primary foods include fruit, berries, small rodents, rabbits, birds, snakes, frogs, and insects. They will scavenge on animal remains, including road-kills, as well as garbage and pet food left outdoors. In suburban areas they prey upon unprotected pets, including outdoor house cats and unsupervised domestic dogs. Because coyotes utilize so many different food sources, they have adapted to and live in a variety of habitats including urban and heavily populated areas.
Habits
Coyotes are usually shy and elusive, but are frequently seen individually, in pairs, or in small groups where food is commonly found. A family group, more commonly known as a pack, consists of the parents, their pups, and, occasionally, the previous year’s pups. Thus, the size of the family can vary widely. Male and female coyotes pair up, establish a territory, and breed in February or March; 4 to 8 pups are born in April or May. Activity is variable; they can be active night or day, and sightings at dawn or dusk are common. They remain active all year-round and do not hibernate. Once a coyote has established itself into an area, it will actively maintain a territory that may vary in size from 2 to 30 square miles. One family of coyotes often encompasses one or more residential suburban areas or towns. Coyotes are highly territorial and actively keep non-family members outside their territory, both individual coyotes and other family groups. It defends its territory through howling, scent marking, body displays, and confrontation with the trespassing coyote.
A Coyote’s Howl
When one hears a family of coyotes howling, it is easy to get the impression that the area is overflowing with coyotes. In reality, there are usually just 2-6 coyotes, including the pups. Howling is the main way for coyotes to communicate with others. While some people find it unnerving, this howl serves many purposes, none of which are malicious:

Counting coyotes by listening to their howls can be quite difficult, even to a trained ear. Usually it takes a trained researcher, familiar with the vocalizations of the pack, to differentiate the howls of individuals; two coyotes howling with their pups can often sound like many more.
Beneficial Aspects
Due to misconceptions and fears about coyotes, many people don’t recognize the beneficial aspects that coyotes contribute to our ecosystem. Predators, such as the coyote, serve a valuable function in keeping prey species in balance with their habitat. Populations of small animals, such as rodents, could increase out of control without predators. Coyotes can reduce the number of small animals that farmers, gardeners, and home owners consider as pests, such as woodchucks and rodents. While coyotes may change ecological balances of predator and prey species, they will not eliminate other species from the environment. Many scavenger animals, such as foxes, fishers, and ravens, benefit from coyote predation on other animals through increased food availability from leftover carcasses. Many members of the public benefit directly from coyotes through observation, photography, hunting, and trapping opportunities.
Preventing Conflicts With Coyotes
Coyotes are currently well established throughout the state from the Berkshires to Cape Cod. They thrive in suburban and urban areas close to people. Coyotes eat many different foods, including small animals, fruits, vegetables, garbage, and pet food. Remember everything a coyote does is related to a potential meal. Here are a few suggestions to make your property less attractive to coyotes.

Resolving Conflicts with Coyotes
There are 3 main options for resolving a conflict with coyote. These options are tolerance, fencing and good husbandry practices, and lethal removal.
1. Tolerance – Most conflicts with coyotes can be resolved by implementing one of the preventative steps mentioned earlier. The long-term solution is for the public to alter their behavior and be aware of their environment, whether they live in a rural, suburban, or urban setting. By adopting these recommendations, there may be a decrease in the frequency of seeing coyotes in the area.
Coyotes, as well as other wildlife, are adapting to the urban-suburban environments and are opportunistic in finding foods and resources available in these environments. Implementation of these steps empowers the public to be proactive, rather then reactive, in dealing with wildlife situations in their neighborhoods. MDFW’s goal is to try to strike a balance between wildlife and people.
2. Fencing and Husbandry Practices– Coyotes can jump over and dig under fences that are improperly built. Coyotes don’t leap fences in a single bound but, like domestic dogs, they grip the top with their front paws and kick themselves upward and over with the back legs. Their tendency to climb will depend on the individual animal and its motivation. Coyotes are also excellent diggers, therefore the type of fence you install may require barriers be built into or extending from the ground.
Eliminating the coyote’s ability to grip the top of the fence is also recommended. You can do this by installing a PVC pipe that is free to spin around a tight wire. The height of the fence should be a minimum of 6 feet in height and tightly flush with the ground. If you have a lower fence, an outward overhang of fence wire may help prevent coyotes from jumping over
3. Removing Coyotes – If you cannot tolerate a coyote living in your area, the only solution is to have it lethally removed. It is against state law to capture and release coyotes into another area. Often people want to capture problem animals and release them someplace else. However, moving wildlife is detrimental to both people and wildlife populations and is against the law. This law has been in effect for many years, protecting both people and wildlife.
Coyotes are a legally protected furbearer and game animal. Therefore, there are statutory laws and regulations dictating how and when a coyote can be removed. A coyote may not be removed simply because of its presence in an area, there must be damage or a threat to human safety by a specific animal.
As stated earlier, coyotes are naturally afraid of people and their presence alone is not a cause for concern, though depending on human-related sources of food, coyotes can become habituated.
A habituated coyote may exhibit an escalation in bold behavior around people. Behaviors exhibited that indicate the coyote has lost its fear of people are when it:
1) does not run off when harassed or chased,
2) approaches pets on a leash, and/or
3) approaches and follows people. When wildlife exhibits these behaviors, corrective measures can be taken.
If an immediate threat exists to human life and limb, public safety officials including ACOs, police departments, and the Massachusetts Environmental Police, have the authority to respond and dispatch the animal, as stipulated in the Code of Massachusetts Regulations (CMR) 2.14 that pertain to handling problem animals. This includes animals exhibiting clear signs of rabies. If possible, MassWildlife should first be contacted to authorize the lethal taking of a coyote.  In addition, coyotes taking pets are not considered an immediate threat to human safety, therefore ACO’s and municipal police departments are not authorized to remove these wild animals.

Karen Leigh is the Westfield Conservation Commission Coordinator and can be reached by calling (413) 572-6281.