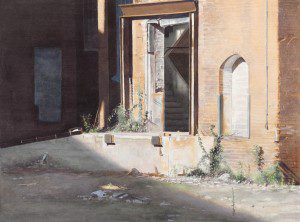 WESTFIELD – Westfield State University Downtown Art Gallery will host a multimedia exhibit titled “Impressions: Night and Day” featuring the work of calligrapher and print artist Mary Teichman and painter Barbara Johnson from January 28 – March 1. There will be an artists’ reception held Thursday, February 13 from 5:30-8:00 pm.
Barbara Johnson received her B.F.A. in painting from Indiana University and her M.F.A. in printmaking from the University of Massachusetts. She has exhibited widely, including galleries and shows in Boston, New York, Mexico City, Berlin, and Singapore, and recently presented a solo exhibition of her work, ”Time and Transformation” at Hamden Gallery, University of Massachusetts, Amherst.
In her paintings, Johnson balances color and light to express the inner reality of her subjects, achieving a transcendence of meaning that reveals the ideals behind the forms. Her mastery of the techniques and style of Renaissance painting, applied to contemporary subject matter, produces strikingly detailed representations of the visible world, making it at once familiar and strange.
Johnson commented on where she drew inspiration for her current exhibit.
“I find the mother root of my personal connection to the subject provides more fuel for the exploration,” Johnson said. “I find these pieces coming together like insistent forces strengthening the organization of the paintings themselves. It was a poetic revelation to me that the pulverized brick, metal, and concrete lacing around the base of the skeletal structures is analogous in nature to the pulverized pigment that I use to build a painting. We are all in the creative destruction business.”
Mary Teichman received her BFA from the Cooper Union School of Art in New York City where she studied calligraphy. Teichman owns her own business where she designs wedding certificates, citations, honorary degrees, and poems. In addition to her calligraphic work, Teichman is a printmaker, illustrator, and painter. Her etchings are in the collections of the Brooklyn Museum, The Museum of the City of New York, The Corcoran Museum, and the National Museum of Women in the Arts.
Teichman has illustrated several children’s books including Color by Christina Rosetti, and Stars for Sarah by Amy Turner. Her artwork has been praised and recognized with several awards including the Jonathan Ross Award from The Society of the American Graphic Artists (2004), the K. Caraccio Color Intaglio Purchase Award from The Society of American Graphic Artists 69th National Exhibition (2002), and most recently, Recognition for Excellence by the First National Exhibition of Intaglio Prints.
Teichman explained where she draws inspiration for her artwork.
“My color etchings are triggered by things I observe: a color or texture, a slant of light–especially those that evoke memories,” Teichman. “I am fascinated by the quality of light at night, and by the shapes emerging as my eyes adjust to the darkness. My layered technique, with its possibilities for rich color and dense blacks, lends itself easily to night scenes.”
The Westfield State University Downtown Art Gallery is located at 105 Elm Street, Westfield, MA. Regular gallery hours are Tuesday, Wednesday and Friday, 2-5 p.m., Thursday, 2–7 p.m., and Saturday 1–5 p.m. For more information, visit the gallery website http://www.westfield.ma.edu/offices-services/art-galleries/downtown-art-gallery or contact curator Faith Lund at (413) 485-7516.