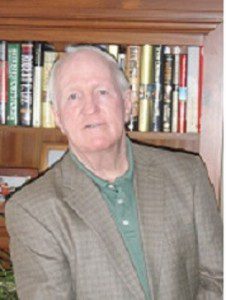 WESTFIELD – R.W. Thompson is no stranger to writing. Or rejection slips.
“I’ve been looking for a publisher for six years,” said the former teacher and principal. “I’ve got a large stack of rejection slips.”
Thursday, the longtime Westfield resident and educator will hold a launch party for his first book, “The Crystal Butterfly”, at the Westfield Athenaeum Children’s Library. The book is the first in a planned trilogy aimed at children between the third and fifth grades.
“Seven all the way through to 12-year-olds,” he said of the intended age range for the story. “That’s when (students) really get into stories and begin learning about subjects like geography and history.”
The latter subjects are near and dear to the author’s heart, as he taught social studies, in addition to physical education, for over a dozen years at Granville Elementary School before taking over as the school’s principal in 1990, a position he held until his retirement in 2006. In his retirement, Thompson has been indulging his passion for writing.
“I’ve always been writing,” he said. “Stories for my children, poems…”
Thompson said that “The Crystal Butterfly”, which is already available at online retailer Amazon.com, took him about a year to write, and that the biggest difficulty in the book’s preliminary stages was in finding an illustrator for it, a task which was awarded to a former teacher at Granville Elementary. 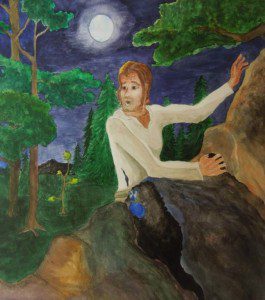 “I think that great illustrations can be very useful in getting the point across in many areas of the curriculum,” Thompson said. “As the old axiom goes, ‘a picture is worth a thousand words'”.
Originally hailing from Arkansas, Thompson has lived in the Westfield area since 1964, and after coming home from the Air Force in 1971, attended Westfield State College, graduating with a bachelor’s degree in education with a dual major in social studies and physical education.
“I wanted to create a book/series that would inspire children to think creatively about a problem using clues from history and geography,” he said, when asked of what he hopes to accomplish. “As a history teacher, I always stressed to my students that there was a story in the pictures of a textbook, and encouraged them to look closer at them. I often used higher level picture books to supplement a specific event that we might be studying.”
Thompson came up with the story years ago for his daughter, who often wore a crystal butterfly necklace, and explained that the story is a mystery about a princess who has lost a crystal stone butterfly, and calls on the reader to find it, using clues related to history and geography.
“The Crystal Butterfly is lost somewhere in the United States, but the next book is somewhere else in the world,” he said.
The story is only 28 pages long, but Thompson said it is already drawing rave reviews from customers online, and that he is anticipating that local residents will enjoy the book immensely. 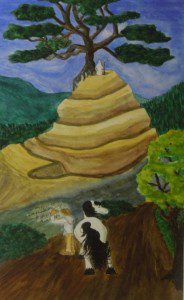 “The preliminary comments from individuals online say it’s terrific,” he said. “It’s been getting nice reviews on amazon. I just want children to get into the story of the messenger’s journey and take this quote to heart ‘In order to understand where you’re going, you have to know where you’re from.'”
In addition to “The Crystal Butterfly” trilogy, the author has two more children’s stories in the works, tentatively titled “Daydreaming” and “The Gift”, along with a full length novel, “Across Time”, which he expects to have finished by the end of 2014.
Thompson said the first sequel to the “The Crystal Butterfly”, which is going by the working title of “The Coral Jaguar”, is currently in the works.
The book launch will be held in the Athenaeum’s Boys and Girls Library Activity Room Thursday, and will run from 6-8 p.m.
Registration for the event is required, and those interested in attending may register by phone or by stopping by the library.