Several local farms had to deal with the impact of the drought and now those same farms are putting that setback behind them as they get underway with the Spring 2017 season.

Despite that, businesses still acknowledged that the past drought certainly had an impact.

“The drought on top of it, made the surviving fruit small,” said Tom Bashista, who owns Bashista Orchards in Southampton. “The people alive haven’t seen it worse than last year.”

Bashista grows a high amount of apples, along with cherries, peaches, and apricots that are harvested from the end of June through November. Bashista said that last year’s drought affected the fruit size. 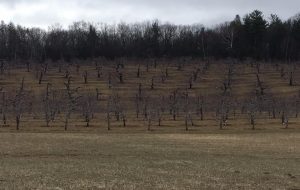 Blossoming Acres in Southwick, also had their own issues with the drought as their yields were down. Co-owner Lenita Bober said that they were forced to spend a lot of money on irrigation in order to keep all of their crops alive during that time.

“The cost of irrigation was sky high,” said Bober.

Just on the other side of town in Southwick, Calabrese Farms had the same kind of struggles with a lack of yield.

“We had significant yield issues,” said owner Donna Calabrese. “All our yields were down, everything was so stressed from the drought.”

According to the U.S. Drought Monitor, at the start of the water year on Sept. 27, 2016, 100% of Massachusetts was at least abnormally dry, just over 98% was moderately dry, 89% was in severe drought, and 52% of the state was in extreme drought.

As of April 4, 2017, those numbers have gone down significantly. About 66% of Massachusetts is abnormally dry and only 16% is in a moderate drought. 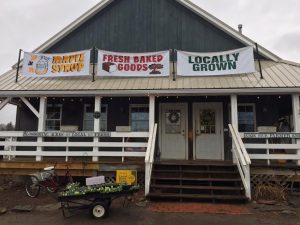 Blossoming Acres is preparing for their early crops, like peas and corn. (Photo by Greg Fitzpatrick)

Calabrese Farms is now seeing  improvements as all of their irrigation ponds are filled and their weed mats are down, which are used for retaining moisture.

“We’re at a good start right now,” said Calabrese. “Everything is nice and moist.”

With the recent rainfall over the past couple of weeks, farms like Bashista Orchards are certainly hoping for more rain. But, Tom Bashista added that he wants to see a more steady rain, but constant rainfall all in one week wouldn’t help either.

Bober explained that, while the rain helped so far this Spring, the late snow fall in March has also been a positive. As warmer temperatures are continuing to be in the forecast, Blossoming Acres is excited to see the temperatures climb and noted that having a balance of different kinds of weather is important.

“At this point, we could use another week of warm weather,” said Bober.

According to the National Weather Service, temperatures in the Westfield and Southwick area will reach up into the 60’s, with a 50% chance of rain showers on Wednesday night and the possibility of some rain on Saturday and Sunday.