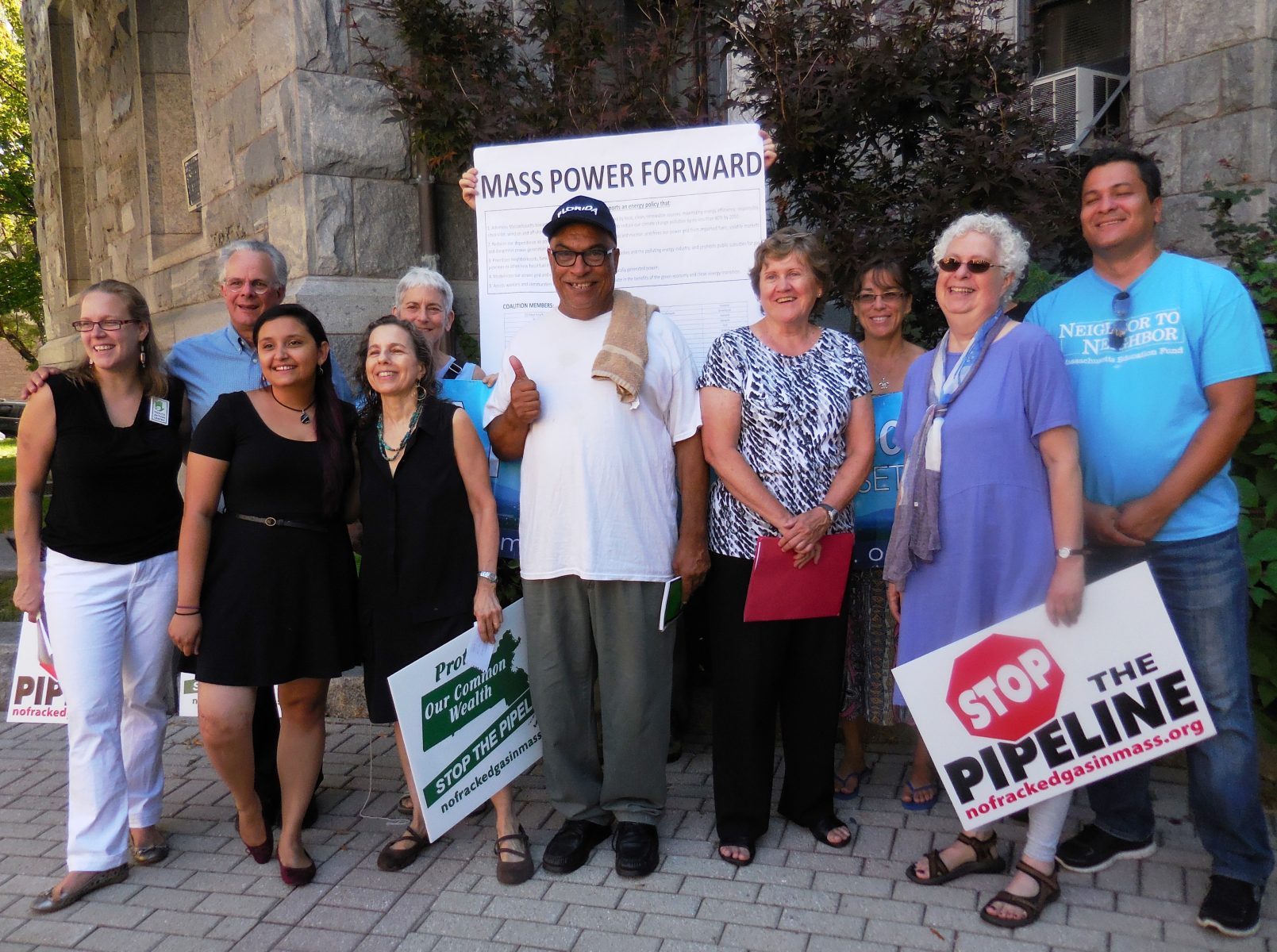 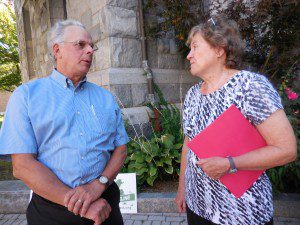 Jed Proujansky, Select Board member from Northfield and Mary Ann Babinski of Westfield Concerned Citizens talk about their advocacy efforts to promote clean energy at home. (Photo by Amy Porter)

HOLYOKE – Environmental advocates from around the region held a press conference outside of Holyoke City Hall Wednesday to launch Mass Power Forward, a new statewide coalition of 80 organizations dedicated to clean energy. Press conferences were also held simultaneously in Weymouth, Boston, Pittsfield and Fall River.
The launch is in advance of a major legislative hearing on energy scheduled for September 29. Claire Miller of Toxics Action Center, a statewide member of the coalition, said the legislature will be considering major energy policy at the hearing.
“We want to be connected and communicating across the entire state,” Miller said. “We’re really at a crossroads.”
Representing Westfield at the press conference was Mary Ann Babinski, spokesperson for Westfield Concerned Citizens (WCC). She spoke of the group’s eight-year-long fight to stop a proposed gas-fired power plant in the city. She said although the construction has been delayed, the power plant proponents continue to apply for permit extensions.
“They are not going away and neither are we,” she said.
Babinski is also a candidate for the Westfield City Council, where she hopes to continue the fight.
“WCC believes now more than ever that this fossil fuel power plant should not have been sited here or anywhere,” she said.
Also speaking at the rally was Jeff Proujansky, Select Board member in Northfield where Kinder Morgan hopes to build a compressor station and a pipeline, similar to the one currently in Southwick.
“Massachusetts leaders will weigh legislation this fall that will determine how our state will replace fossil fuel and nuclear power plants,” he said. “Investment decisions made this year, such as taxes on citizens to help build Kinder Morgan’s pipeline will determine how we power our communities for decades.”
Proujansky warned of problems with the pipeline, which he said will be three feet under the ground in Northfield, according to current proposals, while the frost line is four feet. He also said lesser grade pipe is slated for rural areas.
Other individuals and groups at the rally included State Representative Aaron Vega of Holyoke, Carlos Rodriguez of Neighbor to Neighbor, also in Holyoke, which has been working to shut down the Mt. Tom Coal Plant, and Audrey Ortega of the Springfield Climate Justice Coalition and Arise for Social Justice.
“By investing in renewable energy and energy efficiency,” Ortega said. “We can reduce our dependence on gas and keep energy dollars in our state while protecting the health and safety of our communities.”
“I’ve never seen the grassroots movement on energy like this,” Miller said. “It’s a tsunami of passionate citizens calling on their legislators to make the right decisions. From Pittsfield to Weymouth and everything in between, concerned community leaders have a vision to continue whole hog down the path of clean, healthy, local renewable energy. That’s what Mass Power Forward is all about – a healthy, happy economy.”