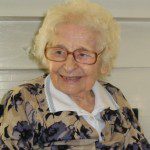 CHARLOTTE, NC – After a long life well lived, Louise Augustine Urbanowicz, 90, faithful follower of Jesus, loving daughter, wife, mother, grandmother, and great-grandmother, was called home by her Lord on Friday, March 29, 2013.
Louise was born to Albert and Agnes Rutka, both intrepid immigrants from Poland, on August 28, 1922, in Saltsburg, Pennsylvania, near Pittsburgh. Losing a brother early on to influenza, she grew up as one of six remaining children in a loving and hard working family in North Versailles, in the Pittsburgh metropolitan area. Upon graduation from high school, she received her RN from Shadyside Hospital in Pittsburgh. As World War II unfolded, she was commissioned as a lieutenant in the Army Nurse Corps, serving in the south of France with the Seventieth Station Hospital for the duration of the war.
While serving there, she was able to visit with her brother Steve, a medic serving in the 70th Infantry Division, while it was reconstituting in a rear area. In a poignant turn of events, she was the last member of her family to be with him before he was killed in action as his division participated in the attack on the Siegfried Line into the German heartland in the spring of 1945. Upon returning from Europe, she furthered her education, earning a BS Nursing degree from The Catholic University of America in Washington D.C. and continued her nursing career at Montefiore Hospital in Pittsburgh.
Having remained in the Army Reserve Nurse Corps, Louise was mobilized and sent to Camp Atterbury, Indiana as the Korean War began. In 1951, while training there, Louise met, fell in love with, and married a dashing young officer, Robert Urbanowicz. He and his unit went off to war, while she remained at Camp Atterbury.
Upon his return from the war, they settled in his hometown of Westfield, Massachusetts and began their lives together. She began her decades long career as a surgical nurse at Noble Hospital in Westfield. She and Robert began their family and soon established themselves as faithful members of Holy Trinity Catholic Church in Westfield. As the years rolled on, she lived her life fully as a wife and mother, seeing all her children complete college, enter careers, and begin families of their own. Eventually the Lord called Robert home in 1999. With her Robert gone, and her children out of the nest, and with the New England winters continuing to bring their annual ice and snow, she moved south to be near her son Craig in Charlotte, North Carolina, who lovingly saw to her care in this last chapter of her life. Her Lord has now declared to her, “Well done, thou good and faithful servant,” and has called her home.
Louise is survived by her sister, Mary Elizabeth Sweeney, of West Newton, PA; daughter, Karla Urbanowicz and her sons, Nathan and Alex of Portland, OR; son, James Urbanowicz and his wife Pamela and their daughters Samantha and Amy of Fort Worth, TX; son, Craig Urbanowicz and his wife Katherine Miller and their daughter Janie of Charlotte, NC; daughter, Lisa McCarthy and her husband; Daniel and their children Caitlin and David of Troy, MI; three great-grandchildren and a host of nieces and nephews.
A funeral mass will be celebrated at St. John the Evangelist Roman Catholic Church, 841 Shore Road, Pocasset, Massachusetts 02559 on Friday, April 5, 2013, at 10:00 a.m. Interment with military honors will follow at Massachusetts National Cemetery in Bourne. Visitation: Thursday, April 4, 5:00 to 8:00 p.m., Fairlawn Mortuary, 180 Washington Street, Fairhaven, Massachusetts 02719.
Memorial contributions may be made to the Basilica of the National Shrine of the Immaculate Conception, Attention: Memorial Registry, 400 Michigan Avenue NE, Washington DC 20017, (202) 526-8300. www.nationalshrine.com.