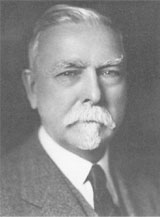 RUSSELL-The Manor House graces the hilltop property of the Horace A. Moses Scout Reservation, however, the ravages of time can be seen when one takes a closer look. 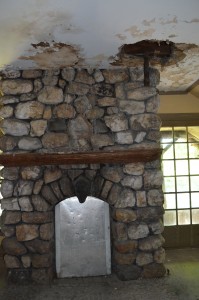 Several rooms in the Manor House on the Moses Scout Reservation in Russell are in need of various repairs.

Owned by the Boy Scouts of America, Western Massachusetts Council, the former summer estate of the late Horace A. Moses has approximately $150,000 worth of work that needs to be done and David Kruse, Scout Executive/CEO, is encouraging professionals who are interested in volunteering their time and materials to give him a call.

“All of the money in the treasury is specifically for Boy Scout programs,” said Kruse. “We are seeking professional businesses that have a specialty to consider helping us bring this building back to its original state.”

Joining Kruse on a recent visit to the Manor House was Steve Kenniston of Wilbraham who is volunteering his time to oversee the renovation phase. Also, Boy Scout historian Robert Kidd of Blandford was also on hand assessing specific details about the uniqueness of the stately mansion.

“The Manor House is the foundation of the reservation and the Crown Jewel of the property,” said Kenniston. “Since 1945, what kids remember is the Manor House.”

Kidd explained that Moses was an industrialist, agriculturist, community leader and philanthropist. After working for his uncle in the then Agawam Paper Company, Moses built the Mittineague Paper Mill in West Springfield in 1892 and later, in 1896, purchased another mill in Woronoco. 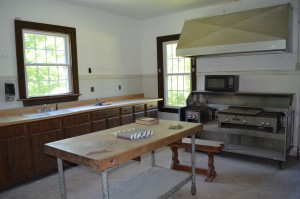 A modern kitchen is needed for the Manor House on the grounds of the Moses Scout Reservation.

Kidd added he has been associated in many ways with the reservation for more than 50 years.

“I, like others, swam, fished, paddled and even went scuba diving in the lake,” said Kidd. “I have eaten in the dining halls, camped in troop sites, slept in buildings, led camp fires, taught training courses, and eaten more than a few young Scouts’ poorly cooked open fire meals.”

As the summer camp season soon gets underway, the reservation will once again be bustling with activity and Kruse welcomes volunteers to also help with the Manor House renovation work.

“We want to acknowledge the work that Springfield Electric and Electric Union #7 did for us in April,” said Kruse, noting the firm donated materials and replaced electrical wiring, and close to 20 volunteers from the union worked one Saturday to complete the detailed wiring work.

“We also want to thank Collins Electric of Chicopee for their donation of materials,” added Kruse. 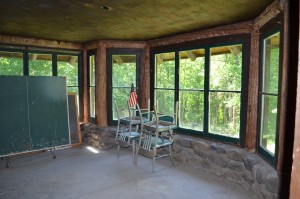 The former dining area of the Horace A. Moses family is in need of several repairs, ranging from masonry work to finishing floors. The Manor House is located on the grounds of the Moses Scout Reservation in Russell.

Fixing the roof was one of the first major repairs that took place last November and Kruse noted that 15 former camp staff members bought the shingles needed for the repair and members of the team from Adam Quenneville Roofing & Siding of South Hadley stripped the roof, make some repairs, and put the shingles on.

Businesses that have also reached out to the Boy Scout Council include Brian Patrick of Chicopee who is working on the plumbing, Dennis St. Laurent of Agawam who is overseeing the project as a volunteer contractor, and McNamara Rubbish Removal of Hampden and Alternative Recycling Systems of Hatfield who both assisted with trash removal during the roof repairs.

As one tours the Manor House it quickly becomes apparent that many hands will make the task at hand flow fluidly. Kidd noted the home is believed to be modeled after Western National Park buildings or estates.

Additionally, Kruse noted that the kitchen needs to be modernized and a heating system is also warranted.

“When all of the renovations are completed, we will then be in need of furnishings,” said Kruse.

Kenniston noted that the volunteers who are assisting him with coordinating logistics are “working down the punch list and they have almost turned the tide.” 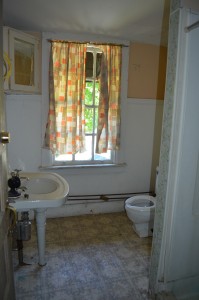 Bathrooms in the Manor House on the Moses Scout Reservation are in need of updating.

Kidd noted the importance of bringing the Manor House back to its stately grandeur of the early 1900’s.

“The building is a time capsule so it is important to preserve its historical significance,” he said.

“The Manor House is the centerpiece of camp and once restored will be the central hub of the camp,” said Kruse. “Kids join Boy Scouts to go to camp and through the programs we offer, they receive important character and life-building skills to last them a lifetime.”

Professionals interested in getting involved in a facet of the Manor House project can contact Kruse at (413) 594-9196, ext. 7002. In addition, donations may be made several ways including in the form of memorials or for the newly created Manor House Window Fund.

“The Manor House has a lot of potential and we hope there are former scouts who will also be willing to lend a helping hand with this project,” said Kruse.