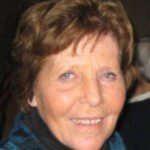 WESTFIELD – Martha Annalea Petrucelli, 71, passed away peacefully on September 1, 2012 surrounded by her loving family. Marti was born in Colorado Springs, CO on February 21, 1941, the daughter of the late Oscar and Lois (Bailey) Carlson.
She was educated in Colorado and attended Colorado State University before completing her B.A. at A.I.C. in Springfield, MA. She was a longtime middle school science teacher, retiring after almost three decades of dedicated service, touching the lives of children in both Chicopee and Westfield. Marti also enjoyed a very successful second career as a real estate agent working for over 25 years with her friends at Century 21 in Westfield, MA.
While there, she was a mentor and great colleague especially to her devoted son, Tony Petrucelli III of Westfield. Her loving daughter, Leigh Petrucelli and partner Sheena Maynard of Essex Junction, VT will miss her immensely. “Sis” will also be missed dearly by her two brothers, Mike Carlson and his wife Peg of AZ, David Carlson and his wife Sachico-Sahn of South Korea. She also leaves behind her devoted dogs, Bailey and Buddy, and her cat, Rosie.
Marti was one of the most hardworking, upbeat, positive, compassionate women around and was an exemplary role model to all who knew her. She loved visiting Vermont and spending the holidays with her children by her side. She enjoyed being outside, loved flowers, especially roses, and enjoyed gardening in her spare time. She spent many Sunday afternoons at Foxboro Stadium watching the Patriots play. Marti will be remembered by many extended family members and dear friends and colleagues. All services are private.