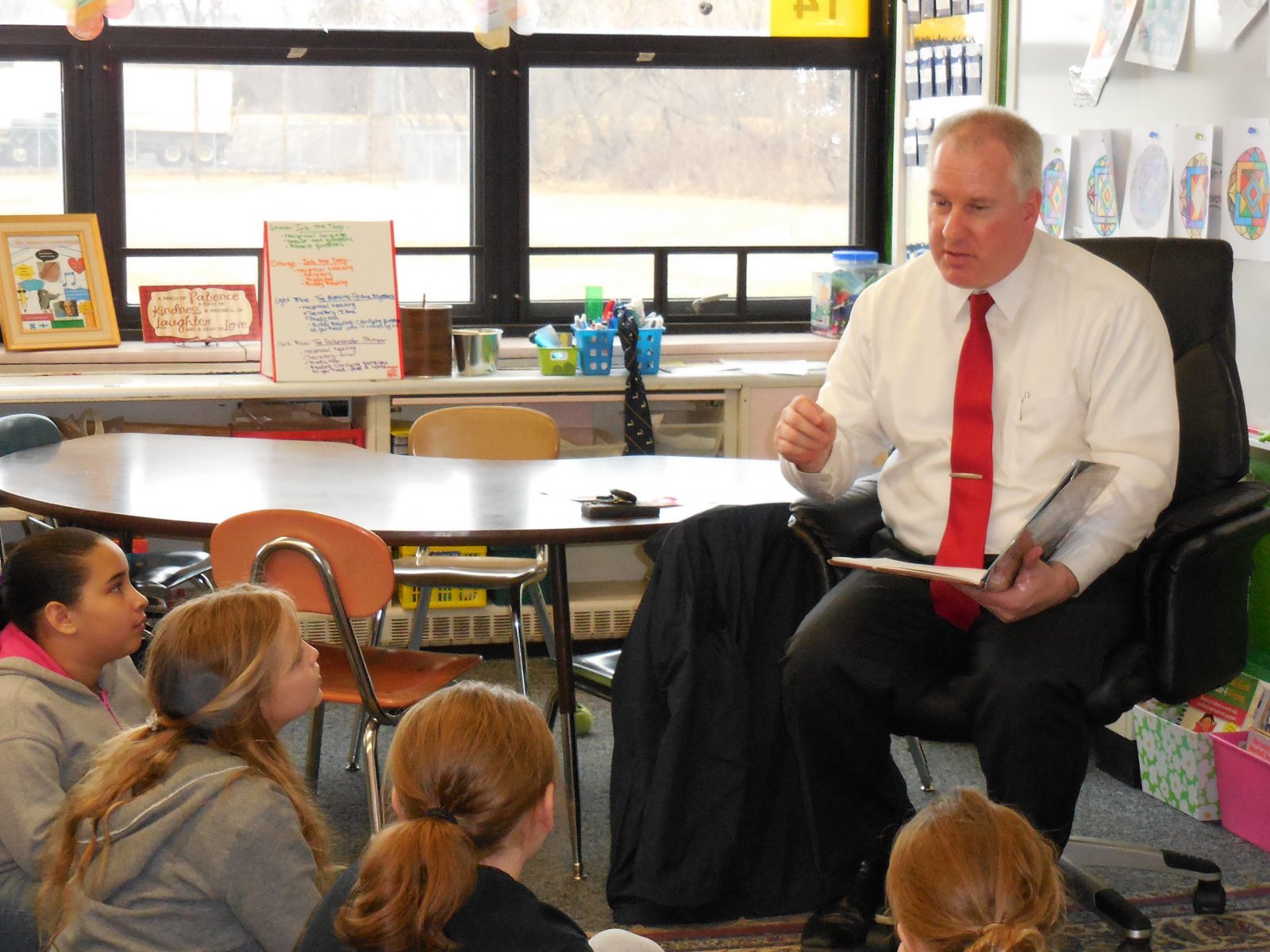 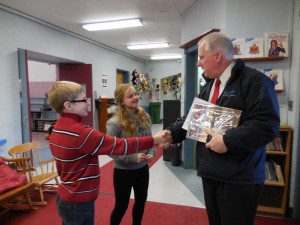 Fourth grade ambassadors Ben Mikhalinchik and Isabella Stowell-Marcoux, both 10, were sent to greet Mayor Daniel M. Knapik as he arrived for the ROAR (Reach Out and Read) event at the Franklin Avenue School on Wednesday. (Photo by Amy Porter)

WESTFIELD – On Wednesday, 35 volunteers from the community, local businesses and retirees visited all six elementary schools in Westfield to read aloud to students in the fourth and fifth grades as part of the ROAR (Reach Out and Read) program. This is the fourteenth year that the event has been held, sponsored by a grant from the Shurtleff Children’s Services in Westfield.
June Turgeon’s fourth grade class in the Franklin Avenue School was expecting a very special visitor: Mayor Daniel M. Knapik. Fourth grade ambassadors Ben Mikhalinchik and Isabella Stowell-Marcoux, both 10, were sent to meet the Mayor at the door, introduce themselves and shake his hand, then bring him to the classroom.
“I’m kind of nervous seeing the Mayor,” Ben said, before Knapik arrived.
The Mayor read from Rags, Hero Dog of WWI by Margot Theis Raven. All of the books read on Wednesday were historical fiction.
Knapik spent one hour with the students, interspersing the tale of the hero dog in France with local stories of Westfield history. He also read the epilogue, where the children learned that the real Rags lived to be twenty, and was inducted into the Legion of Hero Dogs.
After the story was over, Turgeon said the class had wanted to know what a mayor does.
“I am in charge of making sure the town keeps moving forward,” said Knapik.
He said he wanted to make sure they had all the opportunities they needed when they get out of school.
“You can be anything or anybody you want to be when you grow up,” he said.
Knapik was also asked if he had ever met the president (he said he had met the first President Bush). He was also asked if he knew the Mayor of Russell. He replied that smaller towns don’t have mayors, but he does know several members of the Select Board there.
Before he left, several students asked for his autograph, and he graciously obliged them.
The ROAR event happens twice a year in the Westfield Schools, with volunteers reading to pre-kindergarten through third grade classes in the fall.