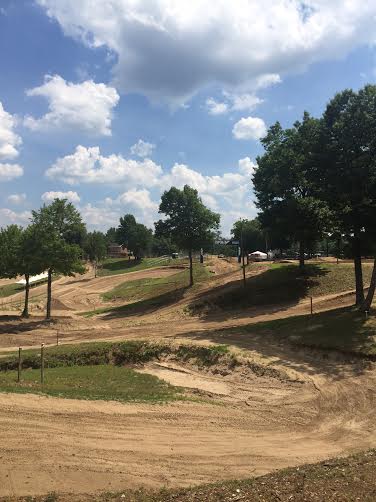 SOUTHWICK – Riding through the Town of Southwick, there just seems to be an added aura of excitement in the community.

Having been absent since 2013, motocross in Southwick is back on the national stage. The Red Bull Southwick National will be held on Saturday July 9. Sanctioned by AMA Pro Racing, the national race will be the seventh round of the 2016 Lucas Oil Pro Motocross Championship. 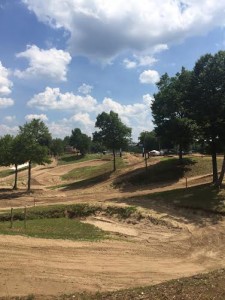 The track has been prepared all week to host the national race on Saturday. (Photo by Greg Fitzpatrick)

There will be two main event races on Saturday with the first race beginning shortly after 1 p.m. and the last race estimated to start around 4:30 p.m. Before the main races, an early practice will start at 8:30 a.m.

But, perhaps the most crucial part of the national event to all the competitors will be the timed practice. After the regular practice, all the riders will be timed around the track. The best possible time will be extremely important as only 40 riders will qualify of the 200 competitors that have initially been registered to race. If there is a situation where a rider’s bike breaks down or a malfunction of some sort occurs, that particular rider will be able to participate in a last-chance qualifier.

Of the two main races, the two times will be combined as the points will be cumulative in order to declare a winner.

As a high-profile track in the motocross industry, the national race in Southwick attracts competitors farther than just the top racers in America from all 50 states.

“It’s not just nationally, it’s internationally,” said The Wick 338’s Rick Johnson, who manages the race. “We have people from all over the world here.”

Johnson confirmed that there will be competitors from France, Germany, and Japan and it will be expected that other countries may be represented as well.

While the majority of the competitors will be coming from throughout the country and the globe, a pair of local products will also be looking to make their own mark.

Jimmy DeCotis of Peabody, Mass. and Ryan Dowd of Ludlow, Mass. will be representing their hometowns as well as the state of Massachusetts.

While there are only a couple New England riders expected in this weekend’s festivities, the success of both DeCotis and Dowd directly translates to the status of motocross in New England.

“New England is a hot-bed for professional motocross racing”, said Johnson. “We have turned out some of the best in the country.”

With the actual race itself being a key highlight to the weekend, Johnson also pointed out several other important details to the event. 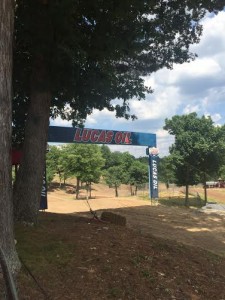 Security will be as strong as ever with roughly 50 members of Southwick and Westfield police on hand. Johnson will be adding additional security staff as well as his own in-house security in order to block off all areas of the track and keep everyone safe. There will also be around 20 firefighters in attendance.

This year, Johnson has made the decision of having two separate VIP tents. Both tents will feature private seating as well as restrooms, a lunch buffet, and a live timing and scoring feed.

Another key change is the jump from three beer vendors to four.

“The reason we went to four this time is because we’ve made significant changes to the track,” said Johnson.

As the track is now designed, the public can’t go through the center of the track anymore but rather now around the perimeter, it allows the different food and beer vendors to be fully accessible for everyone in attendance.

“We’ve tried to design it so people can stay where they are and have everything they need,” said Johnson.

One of those food vendors will be from Moolicious, a popular spot for ice cream in the Southwick community. Being in town for several of the national races, owner Joe Deedy, has had his fair share of experience with the event.

Deedy has seen people from all over the motocross community stop by for an ice cream cone after a fun-filled day at the track.

While the traffic most certainly creates a buzz and even makes Deedy’s parking lot tight for space, the event certainly is a positive for the Town of Southwick.

“It’s definitely a benefit,” said Deedy. “They’ve already been coming in for dinner.”

Jessica Whalley, who manages the Southwick Inn on College Hwy in Southwick, certainly sees the increase in traffic before the start of the big weekend. 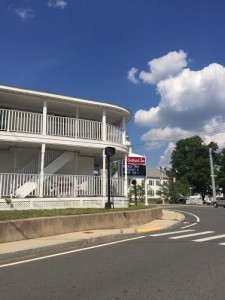 The Southwick Inn is a great option for motocross attendees to stay for the weekend. (Photo by Greg Fitzpatrick)

“It does get a little backed up here,” said Whalley.

Whalley and her staff have been putting up signs in case people from the track need a place to stay.

Just minutes down the road from the Southwick Inn, is the Notch Travel Center. A combination of a gas station as well as a convenience store eatery, the Notch is another place that quickly sees the rise in traffic.

“We definitely see an uptake in traffic,” said Heidi Samuelsen, the Marketing Director for the Notch Travel Center.

The high number of bigger vehicles or trailers that go to the track will find the Notch Travel Center as a great option to back their vehicles in a parking spot or to get gas.

The Notch will also see several members of the motocross community stop in for coffee, water, snacks, and lunch.

“We enjoy seeing racers and fans come through,” said Samuelsen.

As businesses on the main roads of Southwick will benefit, another important establishment in town certainly does as well.

Being close to the track would be putting it lightly, as American Legion Post 338 will be involved with the event. Post 338 is located right next to the track.

Commander of Post 338, Doug Johnson, is happy to help contribute with the nationals and the outcome it has on the Southwick community.

“It’s going to be bringing in a lot of people for all the businesses in town,” said Johnson. 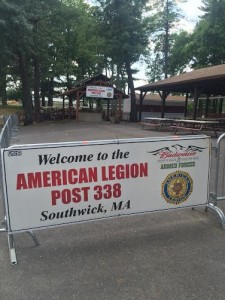 American Legion Post 338 helping out with the event, including their live music on Friday night. (Photo by Greg Fitzpatrick)

Now, Johnson and the rest of Post 338 will be having an event for the motocross community on Friday night.

As a way to not only start the exciting weekend, but also to get a number of people together, Post 338 will be hosting live music. Country Western band, Madison Avenue, will be performing, with the event running from 7 p.m. thru 11 p.m.

Since the start of the first motocross race in Southwick in 1972, the history of this sport in this community is rich.

“There’s so much heritage going on in here,” said Rick Johnson.

Despite the national race being away from Southwick for two years, it’s back, it’s better than ever, and once again helps brighten the Town of Southwick all weekend long.

“The track still being open is definitely a benefit for the entire community,” said Samuelsen.

The general ticket info for the weekend is seen as below: