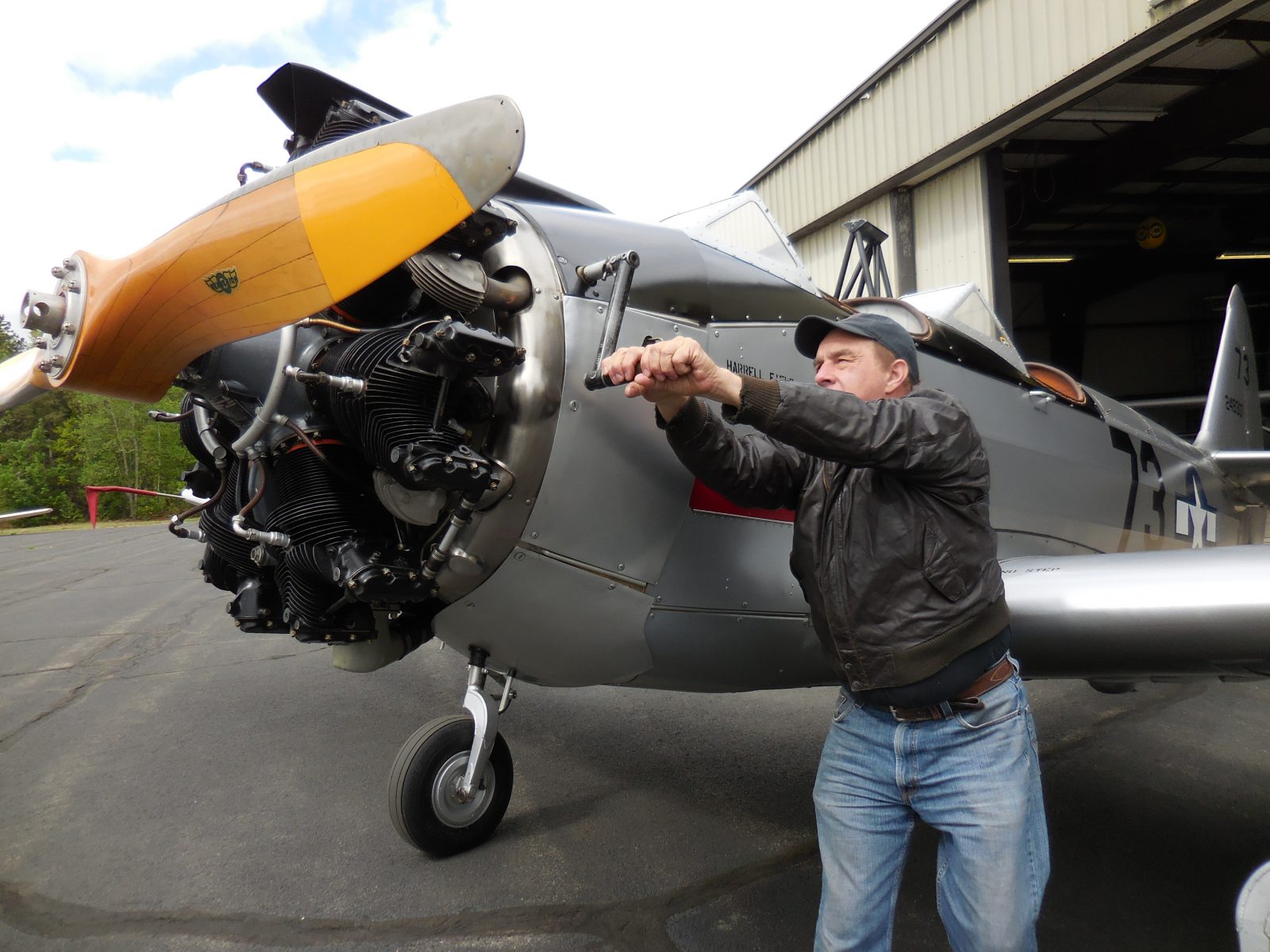 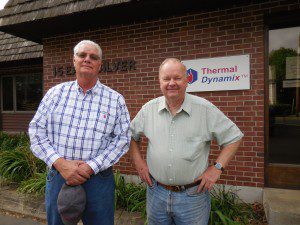 (L-R) Paul Dion of Creative Construction, treasurer of the Westfield Aviation Museum, and president-elect Peter Howe, CEO of Thermal Dynamix, are launching a capital campaign to open the museum to the public this summer. (Photo by Amy Porter)

WESTFIELD – Members of the Board of the Westfield Aviation Museum (formerly known as the Pioneer Valley Military & Travel Museum) located at Barnes Airport, have “grandiose plans,” according to president-elect Peter Howe, CEO of Thermal Dynamix in Westfield.
“The object is to have a live museum, in which pieces actually work, and airplanes are operable,” Howe said, adding that very few air museums have access to a live runway.
Plans include construction of the museum’s first good-sized display hangar by the end of June, which will enable them to open to the public for the first time. Howe said they already have the building permit, and have hired Morton Buildings in Westfield to do the construction. Now they have to raise the money.
The museum is launching a $150,000 capital campaign with a kick-off fundraiser on Wednesday, June 10 from 5:30 to 8:30 p.m. at East Mountain Country Club. State Rep. John Velis will  emcee the event, which will include a cocktail hour, music by Patrick Kennedy and members of the Westfield High School band, and a chicken buffet. There will also be numerous silent and live auction items, including three airplane rides donated by three different members of the museum’s board, as well as automobile and sports memorabilia. Invitations have been mailed out, but any member of the public who would like to attend may contact Rich Rubin at 413-454-5896 or [email protected] by June 5.
Plans for the museum don’t stop with the first building, however. Eventually, they would like to have three display hangars as well as a replica WWII-era control tower, which will house meeting space and a gift shop. There is ample space at Barnes Airport, a 1,200 acre city-owned airport. Paul Dion, owner of Creative Construction in Westfield and treasurer of the museum’s board, said that Barnes Airport manager Brian Barnes has been very helpful and cooperative to the museum.
Dion said another fundraiser for the capital campaign will be the sale of a 1966 Piper Cherokee 6, donated by Les Melanson of Agawam, an active member of the board who recently passed away. Dion said originally they planned to raffle off the plane selling a minimum of 400 tickets at $100 apiece. However, they did not give themselves enough time, according to Dion, and only sold 100 tickets, which are being refunded. The board now plans to put the plane up for sale on Ebay at the end of May or beginning of June, with a minimum bid of $49,900. Dion said the plane has dozens of new parts, and is undergoing an annual inspection.
Planning for the museum has been underway since 1999.
“We’ve actually made a lot of headway in the last few years, with new, enthusiastic members,” Dion said.
They hope to open the museum to the public on weekends this summer, and host fly-ins and car shows on a monthly basis.
“I believe this will attract a number of people to the Westfield area and to Barnes Airport,” Dion added.
One of the displays already a part of the museum includes a 1942 PT 23A WWII trainer, owned by Harland Avezzie of North American Restorations in Westfield, past president of the museum’s board. Avezzie said the airplane came out of a barn in Somers, CT, near the old Somers Airport – a grass strip airport that closed in 1958. Avezzie bought the airplane in 1984, and restored it over the next four years spending a little over 40,000 hours. “I had some help from friends,” Avezzie said. He now flies the airplane 60 hours a year and takes it to air shows, including the upcoming Westover Air Show this weekend.
“There’s probably about 10 of these flying in the country,” he said.
Other museum display items include a 1946 Cessna 120, a fine 3/4 scale flying replica P51 Mustang, an M59 APC (armored personnel carrier), a seaplane, a WWII Jeep and a 1916 Model T that belongs to Calvin Pixley, one of the directors. Eventually they hope to have pre-1915 Indian motorcycles.
“We don’t anticipate any difficulty in securing a collection of interesting displays,” Howe said. “We’re looking to showcase transportation.”