But what can feel even better is also purchasing that cool drink from a lemonade stand and seeing that money go to a good cause.

Cierra Kean, 11, of Westfield, has started to collect money for lemonade and a fruit drink at her lemonade stand in front of City Package Store on Meadow Street. But instead of Kean taking the funds she earns for herself, she is collecting the money in order to hopefully donate to “fallen veterans and fallen officers” in the area, according to Kean’s mother, Jessica Robles. 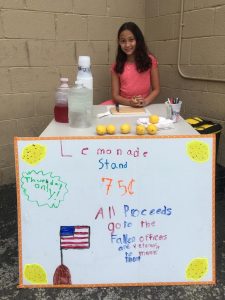 Cierra Kean, 11, at her lemonade stand in front of the City Package Store on Meadow Street. Kean is hoping to raise money for fallen soldiers and police officers in the area.

“I figured it would be nice to thank them for defending us to make sure we have a good life, so I figured I could do a lemonade stand to raise money for it,” Kean said of the concept.

According to Robles and Kean, the money is expected to go to fallen military personnel and fallen police officers, but are unsure which group yet. They are researching where they should donate the money to and aim to keep it local.

The stand is operating every Thursday from 10 a.m. until 2 p.m. this summer, in front of the City Package Store on Meadow Street, where her mother manages.

“I’m proud of her doing this on her own,” Robles said.

According to Robles, so far the stand has been operational for three weeks now, and has raised $101 for their cause.

Robles said her daughter had set up the lemonade stand last year as well, but this time it’s different.

“This year she decided that she wants to do a charity, to donate it,” she said. “It took a while for her to figure out what the charity she wanted to help was and decided she wanted to help out the fallen veterans and fallen officers.”

According to Kean, the lemonade and fruit drink are both 75 cents each. Along with the drinks, Kean provides her customers with complimentary National Guard pens.

“The lemonade, I make it fresh; cut it in half, squeeze them out, add sugar water,” Kean said of her tart and sweet summer treat.

NOTE: This story came to The Westfield News from a tip emailed to us by a resident. If you know of any interesting story ideas, feel free to email the author at [email protected] with the subject “News tip.”