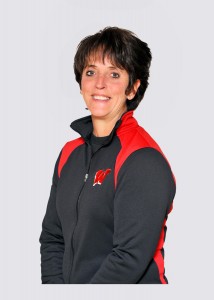 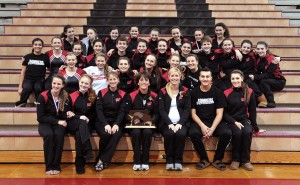 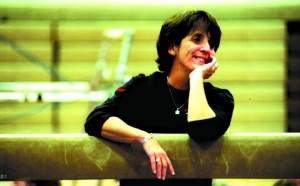 Joanne Hewins rests on the balance beam. Hewins has been selected by Sports Illustrated for its coach’s edition on newsstands everywhere later this week. (Submitted photo) 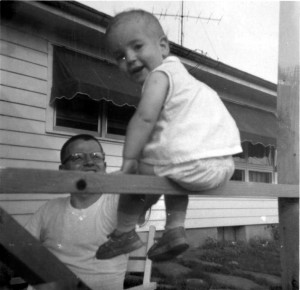 Joanne Hewins is pictured alongside her Dad. (Submitted photo) 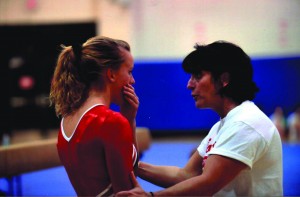 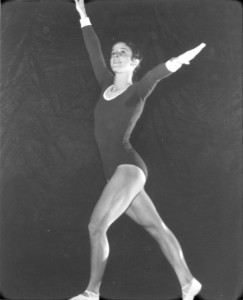 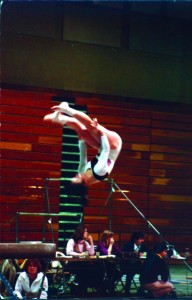 WESTFIELD – Westfield High School gymnastics coach Joanne Hewins remembers a time long ago when she lost her focus, but it has never wavered since.

For the last five years, Hewins and the Bombers have been on a run unlike any other gymnastics team in Western Massachusetts during that time period.

Westfield recently completed a fifth straight undefeated season with yet another sectional crown last month. The Bombers extended their win streak to 62-0.

The dynasty was born under the direction of Hewins, who has made an incredible impact at the school. A record 29 gymnasts participated on this year’s team. For that accomplishment, Sports Illustrated has selected her for its “Faces in Crowd” coaches’ edition.

“I don’t like the spotlight, but I’m very, extremely excited,” Hewins said of the announcement. “You’re only as good as the talent that walks through the door. To make a great coach, you have to have great athletes.”

It was not a typical selection process.

Hewins actually attempted to gain recognition for her team with the “Faces in the Crowd” column, but the submission was denied.

“She nominated her entire team,” said SI editor Ali Fenwick. “Sometimes we can sneak in a double shot of sisters. …We replied to Joanne that unfortunately we can’t put in the team, but I wanted to consider her as a candidate for the coaches’ edition.”

Hewins will be featured in the Dec. 19 edition on newsstands Wednesday.

“What I appreciate the most, and feel has provided for her very successful program, is her passion for the sport and her dedication to her athletes year round as team members and individuals,” WHS principal Raymond Broderick said. “She genuinely cares for their success and well-being in and out of season in and out of the gym.”

“We’re very proud of our whole gymnastics program,” Gomez said. “Part of why it has been so successful is Joanne’s history, her consistency with coaching.”

Hewins first put her feet on the mat as a young YMCA gymnast from 1967-71 beginning at age 9. She attended Pioneer Gymnastics School from 1971-75, and was part of the Springfield College gymnastics team (’77-’81), although an injury slowed her career as an athlete.

Hewins worked out with the Dutch and Venezuelan national teams, and was invited to be on the Dutch national team her sophomore year in college but her parents insisted she finish school instead.

After coaching in some capacity at clinics, camps, and clubs since the age of 13, Hewins finally became a head coach for East Catholic High School in 1982.

“It’s something I’ve always been passionate about,” Hewins said. “I like watching kids progress.”

Hewins has been more than just any old face in the crowd. She has elevated the program to new heights, winning eight western sectional titles during an 11-year span.

Now in her 18th season, she is currently on a 62-meet winning streak.

Hewins is also a club instructor at Roots in Westfield.

The school’s athletic director said the success of the high school gymnastics program, and many of its sports teams, reverberate throughout the halls at Westfield High.

“It just goes to show why Westfield is a Division I school,” Gomez said.

Gomez said the school is highly represented by its football players who have gone on to do big things in college, and others, like 1,000-point basketball scorer Alex Garstka, as well as all of the gymnastics teams who have contributed to Hewins’ success over the last 10-plus seasons.

“With Sports Illustrated it goes national,” Gomez said. “It’s nice to get some national recognition.”