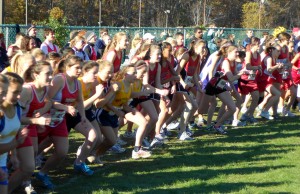 The girls’ race begins for the PVIAC. (Photo by Chris Putz)

SOUTHWICK – Some area high school cross-country teams may have gotten lost in the shuffle of last weekend’s Pioneer Valley Interscholastic Athletic Conference championships – with hundreds of runners from Division I and II competing – but this weekend’s Western Massachusetts race which is separated by gender and division offers the opportunity for everyone to shine.
“Last week’s race, as big as it is, was just a warm-up,” longtime Southwick boys’ cross country coach Dick Atkinson said.
Southwick senior Adam Cool was the first runner from his Division II team to cross the finish line, finishing the 3.1-mile course at Holyoke Community College in 18:27.78. Mark Hegarty won the race for Division I representative Cathedral in 15:33.92.
Junior Jesse Gregg placed second for Southwick in 108th (18:35.86). The Rams placed 28th overall.
But now competing against their D2 peers offers a more compelling race for some individuals.
“We have nobody favored to win it, but my main goal is to get (senior) Kevin Hepburn, Adam Cool, and Jesse Gregg qualified for the state meet,” Atkinson said. “I just hope the kids will enjoy themselves. I hope they’re happy when they’re through.”
The race returns to Northfield Mountain Saturday after construction issues forced a site change last season. The Division II girls’ race begins at 11 a.m., followed by the Division I race at 11:40. At 12:20 p.m., the Division II boys’ race takes place. The Division I boys’ race is scheduled to start at 1 p.m.
“It will be a great challenge,” Atkinson said. “It’s a wonderful course.”
The 3.1-mile course begins with a one-mile climb, turns down hill in the second mile, and ends with a series of rolling hills in the final third before a straight run near the finish line.
Atkinson said if his top runners finish somewhere around the 18-minute mark, a top-five finish for the Rams is possible.

LADY RAMS – ANOTHER COOL PERFORMANCE? Southwick sophomore Paige Cool is looking for repeat success. Last season, Cool finished 10th in the Western Massachusetts championships to earn a state berth.
On Saturday, Cool, senior Natalya Riberty, and eighth grader Emily McKinney are all likely to all finish in the top 20, Lady Rams coach Lee Haseltine said.
“It’s a tough course,” Haseltine said, “but we’ll see. The hills, especially in the first mile, are going to be the toughest part.”
Last season’s race at Berkshire Community College in Pittsfield was more of a flat course.
“You need to take it easy in the first half,” Haseltine said of this year’s championship run. “If you don’t, you’re going to get burned out. It’s going to hurt you in the long run. If you go out too fast on this course, you’re going to pay for it in the end.”
The Lady Rams held their final practice Friday morning with a light four-mile run.

BOMBERS AWAY: A pair of Westfield High School runners – Blake Croteau and Sierra Swords – is looking to build off their runs at last weekend’s PVIAC race.
Croteau coasted to second place (15:40.97) last weekend, admittedly a tune-up to Northfield Mountain. Swords ran her fastest time of the year, 19:49.40, good for 17th overall.
“Northfield is a hard course, but it’s very rewarding,” Swords said.
The reward for the lucky ones will be a trip to the state meet.