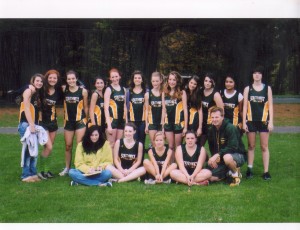 WESTFIELD – The Pioneer Valley Interscholastic Athletic Conference high school cross-country championships will go on as scheduled, except for one fundamental difference – it will not be a home affair for the Whip City.
The PVIAC has announced that the PVIAC championships will be held Saturday at Holyoke Community College. The girls’ race is expected to begin at 3 p.m., with the boys’ competition to follow at 3:40 p.m.
The championships had been scheduled to take place at Stanley Park but the course is closed due to the damage from the recent snowstorm. But Westfield boys’ cross country coach Dana Geis is not concerned.
“I don’t see it as a disadvantage,” Geis said. “Some of our kids are actually stronger in road races.”
Holyoke’s course will feature a perimeter run on pavement on the campus of HCC. Geis said many of his runners actually compete in road races throughout the summer months.
“You don’t have the mud and natural barriers to counter,” Geis said. “I don’t see it (the change in venue) being a problem.”
Geis said the main difference will be that no official practices are scheduled for this week with school closed, but said his runners are expected to taper their runs down anyways with state championships looming next week. The MIAA enforces a “no school, no play” policy.
Also on Saturday, the Westfield High girls’ volleyball team will host Chicopee. Westfield was seeded sixth and the Pacers are 11th. The time was still to be determined as of press time.
This Friday’s football game between Westfield and Central has been postponed to Thursday, November 17 at 6 p.m. The Bombers’ gymnastics meet against Agawam on Friday has been cancelled. The meet will not be made up, but next Thursday’s championship at Westfield High will go on as planned at 6 p.m.
The state golf tournament has been rescheduled for Monday, November 7.
The Lady Bombers soccer team, which await tournament seeding, learned Wednesday that they will not be penalized for having to forfeit a game against Longmeadow when postseason criteria is examined.
The St. Mary’s boys’ soccer team, which at 7-8-2, is one win shy of a .500 record or better, necessary to earn a tournament berth, learned Wednesday that it had been granted a waiver request to participate in postseason play despite having to forfeit its final game due to cancellation.
Despite all the school closings, the Westfield Voc-Tech boys’ soccer team still participated in the Massachusetts Vocational Athletic Soccer Tournament at Keefe High School in Framingham on Wednesday.
Gateway cancelled its final soccer games of the regular season. The Gators, who already qualified for the postseason, now await the announcement of their first opponents.
Southwick-Tolland Regional High School athletic director Frank Montagna was unavailable for comment as of press time.