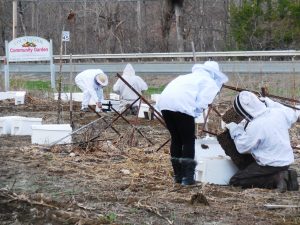 Selling nuclear colonies of bees at the Countryside Community Gardens in Russell on Wednesday. (Photos by Amy Porter)

RUSSELL – It was nuc pick up day on Wednesday at the Countryside Community Garden on Route 20, where scores of people wearing beekeeping helmets and uniforms were buying nuclear colonies of bees from Bill Crawford of New England Apiaries.
Crawford, who is based out of Westfield, has been selling the nucs at the garden for the past three years. He said people come from New York City, northern Vermont and Cape Cod to pick up bees from him. He keeps 1200 colonies all over the Northeast, including one at the Countryside Community Garden, each of which has 50,000-60,000 bees. He moves the colonies down for the winter in Georgia. The 200 nucs he was selling on Wednesday had just come back north. 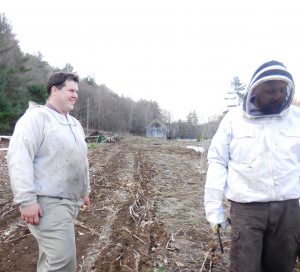 Each nuc comes in a box with five frames and approximately 5,000 bees and one queen, and costs $165. Helping Crawford on Wednesday was fellow beekeeper Nate Sperry, the horticulture instructor at Westfield Technical Academy.

Sperry opened up one box for some first-time beekeepers to inspect, commenting that it was “a good nuc of bees.” He waved smoke over the box to quiet the bees as he pulled out the frames, giving some tips to the buyers in the process. He said with the first colony, the first thing to know is to feed the bees sugar water until the nectar comes in, and asked them if they had a feeder. He said a lot of first time owners don’t feed their bees. 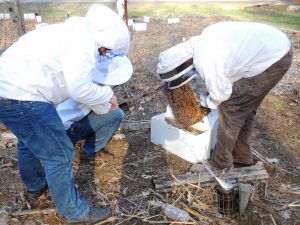 The second thing to learn is to treat for mites, Sperry said. The way to do that is to take about 300 bees, or half a cup, and shake them in alcohol. Pour them into a white Tupperware tub, and look at the number of mites, which are the size of a pinhead and a reddish color. Sperry said if they find three mites per 100 bees, they should start thinking about treatment, which can be done with an alcohol wash.

“Get comfortable with treatment for mites and feeding your bees, and you’ll be better beekeepers than half the people out there,” Sperry said. Sperry owns 50 hives in Russell, which he admitted are not easy to winter over.

Sperry then pulled out the frames one by one, looking for the queen bee, which he found on the last frame. He asked the buyers what kind of a hive they had, and they replied 10-frame equipment. He said another tip is to put the five frames from the nuc into the middle of the hive, and wait until the bees have covered eight sides, and then put the second box on. He said if the frames go in too quickly, the bees will congregate at the top, when the goal is to have all drawn-out frames. 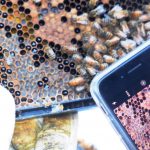 New owners take a photo of the queen bee, at the top left corner of the phone. 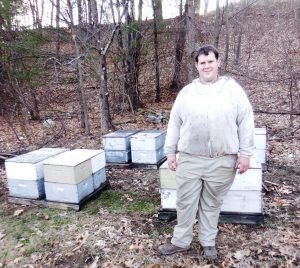 Sperry also advised the owners, who live in Palmer, to wait until the morning to put in the frames. However, he said they should leave the nuc where the hive is, because if they put them on the deck overnight, the bees will return there from the hive.

Chapman, who is a member of the Mennonite community in Russell, has been keeping bees since he was 15, full-time for the last five years. He now has a business partner, Jon Hollingshead, who was also at the nuc pick up. New England Apiaries also sells “Billy C’s Raw Honey,” which may be found at Big Y stores locally. The business also provides pollination services by installing colonies where they are needed. More information may be found at www.newenglandapiaries.com.

Although all of the nucs were sold out on Wednesday, Chapman said he has more coming on April 29, and some of them are available. For questions and inquiries, call Bill Crawford at 413-454-8403 or by email at [email protected]