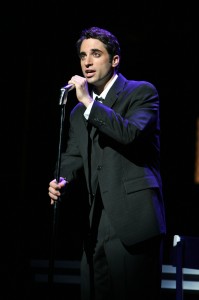 Caption for Walk Like a Man: From left, Joseph Leo Bwarie (Frankie Valli), Preston Truman Boyd, John Gardiner and Michael Lomenda perform “Walk Like a Man” in Jersey Boys, playing at The Bushnell in Hartford, Conn., through November 6. (Photo by Joan Marcus)

HARTFORD – From the first familiar strains of “Oh, What a Night,” albeit a French rap star version, through a trip-down-memory-lane collection of chart-topping golden oldies, to the final reprise that brought the audience to its feet – something it had been wanting to do all night – the hits just kept on coming and it was indeed “Oh, What a Night” for the Jersey Boys at the Bushnell.
“Jersey Boys,” which played to a full house Friday night, is a biographical approach to the life of Frankie Valli that catalogues the emergence of the Four Seasons as one of the most famous white vocal groups of the ’60s. The script is peppered (though not necessarily chronologically) with all those tunes that endure to this day that we sing along with all the time, even if we may have forgotten who the original artists were.
In “Jersey Boys,” we first meet the Italian-born Francis Castelluccio (Valli as played by Joseph Leo Bwarie) when he is recruited by Tommy DeVito (John Gardiner) to become the fourth Lover, forming the Four Lovers, a precursor to the Four Seasons, and the tale follows the vocal group through its many metamorphoses.
The group’s history is entertainingly recounted as each Season, in turn, relates a segment of their trek to fame and fortune from his viewpoint. In addition to Bwarie and Gardiner, there is Preston Truman Boyd as genius songwriter Bob Gaudio and Michael Lomenda as Nick Massi, who repeatedly (to the audience’s delight) deals with crises by threatening to leave and form his own band.
We learn that a failed audition at a bowling alley provided the group’s moniker “Four Seasons,” that Valli cut hair to earn a living in the early “lean” days, that several of Frankie’s friends from the “old neighborhood,” including DeVito and Massi, did stints in jail, and the four were once arrested for skipping out on a hotel bill, an event recounted as the jailed boys sit on aligned toilets in lockup.
While the story line is revealing and fascinating and the actors’ lighthearted narration highly entertaining, it is Bwarie’s enthralling replication of Valli’s trademark falsetto and the group’s outstanding three-part-harmony, capturing that unique, unforgettable sound of the Four Seasons, that keeps the audience entranced, heads nodding and feet tapping.
From “Sherry,” which catapulted the group to fame on Dick Clark’s American Bandstand in 1962 earning them their first gold record, to crowd-pleasers such as “Big Girls Don’t Cry,” “Walk Like a Man,” “My Boyfriend’s Back” and “My Eyes Adored You,” to Act Two’s “Can’t Take My Eyes Off You,” “Working My Way Back to You,” “Rag Doll,” “Who Loves You” and many others, there’ll be plenty to sing about in the shower for months to come.
Pop art imagery – dropdown graphic-novel-style panels – enlivens scenic designer Klara Zieglerova’s basic no-frills set of fencing and stairways. A single crossover walkway allows for added drama as characters transition from the group and as lives change. The crossover also serves as staging for a horn section (Valli’s vision) that is added with great fanfare in the final scenes.
Lighting designer Howell Binkley cleverly brings home the “thrill of success” as the group rises to glory at the end of Act One by turning the tables, in this case blinding spotlights and strobes, on the audience as the actors face backstage.
This return engagement of the Tony, Grammy and Olivier Award-winning musical “Jersey Boys” plays The Bushnell through November 6. Tickets are available at The Bushnell Box Office, 166 Capitol Ave., Hartford, online at www.bushnell.org or by calling (860) 987-5900.