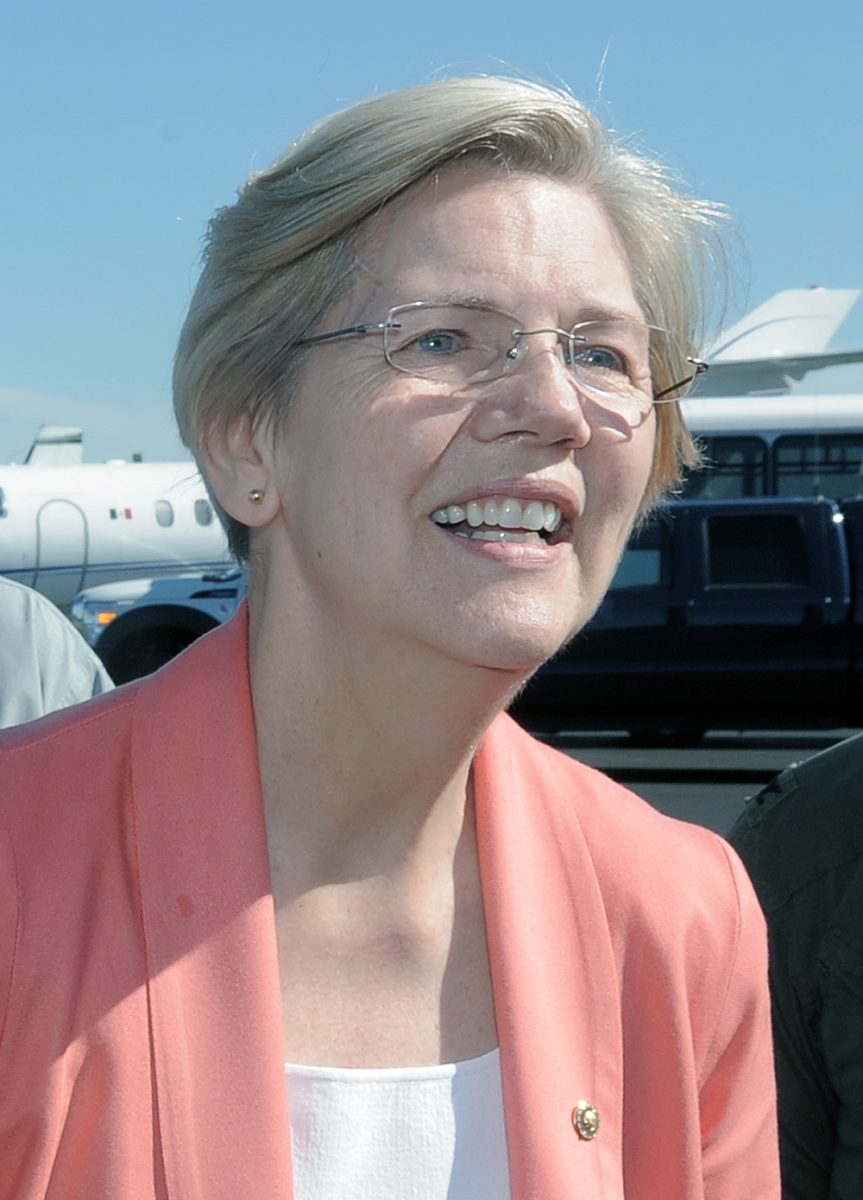 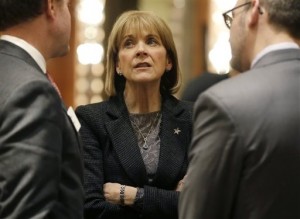 Massachusetts Attorney General Martha Coakley speaks to two men after addressing a breakfast meeting of the Greater Boston Chamber of Commerce at a hotel in Boston in January. Coakley, a Democrat, is seeking the governor’s office in the 2014 election. (AP Photo/Steven Senne)

BOSTON – Democratic gubernatorial candidate and Massachusetts Attorney General Martha Coakley is calling on the state legislature to reject proposed cuts in community-based mental health services.
Coakley unveiled a plan earlier this month to deal with what she said was a behavioral health crisis in the Bay State.
She warned that Gov. Deval L. Patrick’s proposed budget for the fiscal year, starting July 1, could eliminate services for hundreds of people with mental health and drug addiction problems, and that lawmakers should restore the funding in their version of the spending plan.
The Attorney General, who hails from western Mass., also called for expansion of peer support programs to help reduce the stigma of mental illness, and for better coordination between primary care and mental health treatment. 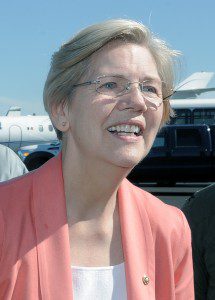 Last week, Massachusetts Senator Elizabeth Warren spoke as the featured guest at the annual “Fight Stigma” fundraising event sponsored by the National Alliance on Mental Illness Massachusetts in Boston’s Jamaica Plain neighborhood.
Warren addressed the importance of the Mental Health Parity Act (MHPA) and stressed the importance of grassroots organizations like NAMI make a difference in fighting discrimination and stigma.
“People with serious mental illness know how important it is to have friends in Congress,” said Stephen Rosenfeld, Massachusetts’ NAMI Chairman, who also thanked the efforts of former Congressman Patrick Kennedy and late Senator Paul Wellstone. “We have mental health parity. We believe Senator Warren is going to be our new champion. It means a lot to all of us that she is coming to stand with us against stigma and discrimination.”
NAMI Massachusetts relies on the thousands of donations received each year from people and organizations that support its mission for programs and services such as Family–to–Family, In Our Own Voice, NAMI Basics, and NAMI Connection.
“A few years ago, the Department of Mental Health restructured their support of outpatient clinics,” said Susan West, CEO of the Carson Center, a behavioral healthcare service provider in Westfield that works with children, youth and adults throughout western Mass. “They focused their support on people with the most serious illnesses, who would otherwise require long-term hospitalization. But that left many behind”
“It created a crisis,” she said. “When that happened, many clinics had to close.”
While she reiterates and maintains that the Carson Center is “non-political”, West said that she would support the efforts to halt cutbacks in state mental health funding, and to restore support of clinics.
“The Department of Mental Health says ‘you can collect fees from insurance companies’, but the fees don’t cover the cost,” she said. “The rates cover 50 to 60 percent of services, and agencies are struggling because of it.”
West said that the Carson Center is able to get by through managing creatively.
“We’ve created a lot of internal efficiency,” she said, adding that the turnover rate for employees in the field is high, due mostly to its comparatively low salaries. “They might leave the field, the state. Oftentimes, they’ll leave to work in a hospital system. But we have people working here who are so devoted. And the Westfield community has invested in us.”
She worries that the Commonwealth’s mentally ill,’the most vulnerable among us’, in her own words, are being neglected.
“It’s a different kind of service for those who have been de-institutionalized,” she said. “But the next layer isn’t able to get that care.”