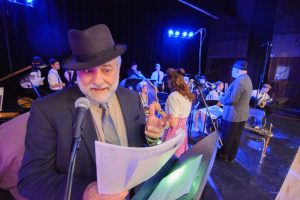 Jay Pagliuca performs part of the staged “War of the Worlds” radio program while the Westfield High School Jazz Band is in the background in October 2015. (WNG file photo)

“The First Edition Matter” features the character of Johnny Dollar, made famous in a CBS Radio series that ran from 1949 until 1962. Johnny Dollar was billed as “America’s fabulous freelance insurance investigator,” and most episodes opened with Johnny getting a phone call from an insurance company official asking that he investigate a claim.

“Death, Literally” is one of 30 short plays written by McMahon, “…mostly as a hobby because, I don’t know,” said McMahon, “You have to do something that somebody can say that you did in your obituary.”

In the play, the lead character is a murder mystery author suffering from writer’s block, who is confronted by his female creation who is poisoned at a dinner party. She doesn’t want to die and wants to know who kills her, even though the author doesn’t know yet. Together they confront the denizens of the story to figure out the logical conclusion to the book.

McMahon recently pitched a sitcom to the FX network and NBC. He is currently pitching one to the Disney Channel as well.

Admission to the show is $5, with proceeds going to the Westfield State University Jazz Ensemble, which will provide the music during the performance.