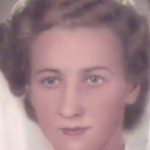 WESTFIELD – Olga E. Donner, 87, entered into eternal rest Thursday, January 31, 2013. Born in Europe on February 19, 1925, she was the daughter of the late Ludwig and Katherine Gelina.
Olga is survived be her loving son, Richard A Donner of Westfield; a brother, Frank Zapolski from Poland; and two sisters, Alma Schubert from Germany, and Helena Marcowka from Poland. Besides her parents, Olga was predeceased by her husband, Julius Donner in 1998 and by her son, Ulrich Donner in 2008.
The funeral for Olga will take place Thursday, February 7, 2013 at 11:00 a.m. from St. John’s Lutheran Church, Broad Street, Westfield. Burial will follow in St. John’s Cemetery also in Westfield. Calling hours will be on Wednesday from 5:00-7:00 p.m. at the Robert E. Cusack Funeral Home, 94 Main Street (Route 20), Westfield.